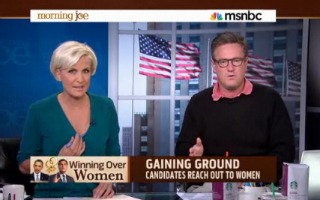 On Thursday, Morning Joe host Mika Brzezinski called out Mitt Romney for what she described as his “insulting” and untrue meme-churning “binder full of women” remark.

“How is that not a lie?” she asked of Romney’s binder comment. “Can we go there, Halperin? When you say you ‘sought out’ and then it turns that they were brought to you, that’s not the truth. Correct?”

Panelist Mark Halperin said he didn’t think the binder comment should be the focus of the campaign, prompting Brzezinski to ask whether calling out lies wasn’t their job as members of the media.

Halperin replied that “I think we should have a spirited debate in the campaign about which of these candidates would do more for all Americans — including women — and look at their policy proposals and their records.”

Brzezinski then pointed out that Romney’s story also reveals that it took him until he was running for governor to realize “there’s not enough women in the workforce.” Was there no one in his life who could have or would have pointed this out to him much earlier, she wondered. Plus, she continued, it turns out that he didn’t even seek out more women himself — those binders were, in fact, given to him (and his rival candidate) by women’s organizations. Saying otherwise isn’t merely a “slip of the tongue,” she concluded. It’s an outright lie.

Host Joe Scarborough thought the whole discussion about binders reflected an “act of desperation” by Democrats. Brzezinski maintained that it was “insulting” for Romney to have made up a story in an attempt to reach out to women voters.