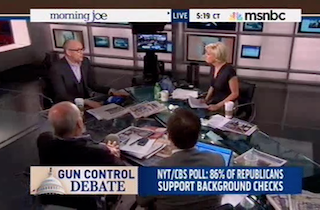 On Thursday, Morning Joe took on Sen. Pat Toomey‘s (R-PA) remark about how many Republicans opposed background checks because they didn’t want to be seen helping President Obama. The roundtable criticized the GOP for being “childish” about an important issue, making their moves based purely on politics. It may work now, John Heilemann argued, but it’ll do the party long-term damage.

“In the end, we didn’t [pass the measure] because our politics have become so polarized,” Toomey said. “There were people on my side who did not want to be perceived to be helping something that the president wanted to accomplish, simply because it’s the president who wants to accomplish it.”

“You would want to argue that that potentially couldn’t be happening” Mika Brzezinski remarked. “And that, potentially on issue is as important as this, would not happen — that Republicans would not be so childish.”

Yet polling shows otherwise, she asserted, including among Republicans. It’s “purely political throughout,” Heilemann later added, noting that it’s just the latest development in what has been congressional Republicans’ strategy for some time: Opposing Obama.

“This feeds into this fundamental dynamic of the Republican Party right now,” he asserted. “The things that they do to try to thwart the president every turn do not hurt them particularly at the level of congressional politics. They will likely hold on to the House of Representatives in 2014, they may even make gains in the Senate in 2014. But they continue to do themselves long-term damage at the level of a national party because of the fact that 88 percent of people are in favor of this bill.”