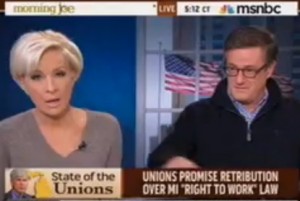 On Wednesday morning’s Morning Joe, host Joe Scarborough tried his damnedest to get the liberals on his panel, like former Congressman Harold Ford, Jr., to explain to him why supporting so-called “right to work” legislation is an inherently anti-union position “because I know there are a lot of hardworking union people out there that might think I’m anti-union. I’m not.”

The panel was spectacularly, head-deskingly unable to do it, so the task falls to me. Yes, Virginia, you are anti-union.

Michigan Gov. Rick Snyder‘s decision to help the Republican legislature in his state to force through so-called “right to work” legislation has drawn white-hot media attention to the cause of union rights, but not in a good way. In fairness to Morning Joe‘s panel, many liberals have done a poor job of explaining “right to work,” choosing to focus on why it’s bad, instead of why it’s wrong, but this segment was the Citizen Kane of awful pushback against “right to work.”

Joe Scarborough: Harold Ford, I’ll ask you, I should be able to work where I want to work, and pay union dues if I want to pay union dues. Is that a demonstrably anti-union position, or supporting freedom?

Sorry, liberals, I should have warned you to put a pillow on your desk. Mr. Ford, if you’re reading this, everything you say after “I think it’s supporting freedom” doesn’t count.

Liberal co-host Mika Brzezinski also got in on the action, telling Scarborough, toward the end of the segment, that “I think your question’s legitimate if — especially if the unions aren’t being effective in making the pay raises good, in making the workplace better. And I think that’s a very good question today, in terms of how well people are being paid.”

What Joe Scarborough, Harold Ford, Jr., Mika Brzezinski, and the rest of the panel seem not to understand is the basic idea of what a union is. A union is a group of workers who organize into a single unit to collectively bargain with employers on behalf of workers’ interests, including wages, benefits, workplace safety, and other things. The reason unions are effective is right in their name: the workers unite in order to exert the only form of leverage they have, which is collective action. There are some who suggest that unions are somehow antithetical to the “free market,” but they’re really just companies whose product is workers, just as companies are just unions whose rank-and-file are shareholders. Unions deserve, and require, legal protections against the weakening of their product, just as surely as companies deserve, and receive, legal protections against the weakening of their products. With that in mind, here are the answers to some of Joe Scarborough’s questions.

The workplace chose to have a union, and Joe decided to work there. If he doesn’t want to belong to a union, he can a. work somewhere else, or b. work there and pay dues, and not belong to the union, while enjoying the fruits of collective bargaining, and lobby his fellow workers to decertify the union via a democratic process. Freedom!

Well, if you’re a corporate shareholder, and you don’t like, say, Pepsi’s formula, aren’t you, as a part-owner of the Pepsi name, free to sell your own formulation, and label it “Pepsi,” and if people don’t like it, they won’t buy it, and if they do, then great? No, because Pepsi shareholders agree to act collectively, which protects the Pepsi brand. That’s why you can’t just take a piss in a can and call it “Pepsi” (Budweiser, maybe).

If a union can’t bargain for all workers, the workers’ only leverage, collective action, ceases to exist. That’s not just bad for workers, as liberals like former Vermont Gov. Howard Dean argued in a subsequent Morning Joe segment, it’s wrong, because that workplace voted to have a union, and that’s what a union is: workers leveraging their right to act collectively.

Harold Ford, Jr. brought up the issue of unions’ political activity, which leans heavily Democratic, but didn’t defend it:

“This is about political purposes, political purposes. So there’s a broad set of reasons that these dollars are used for. We’re making your workplace better. We’re ensuring that you are not only protected at work, but that you’re…”

Ford acts as though union political activity is somehow walled off from making the workplace better, from protecting workers, but it’s not as though unions support Democrats because they’re super-gay-friendly commie pinkos, it’s because Democrats, at the very least, don’t support destroying unions, and destroying workers’ rights.

Forget the why for a moment, or whether you agree with it, or even whether Democrats do a great job of protecting unions. Maybe Democrats only oppose union-busting laws so they can get union money, or maybe they really believe in workers’ rights. Maybe Republicans only support “right to work” because they want money from corporations who profit from depressing workers’ wages, or maybe they really do believe that the choice is between low-wage jobs and no jobs (a choice that, in this debate, is really only created by the existence of “right to work” laws). It’s irrelevant. Unions supporting Democrats is no different than a corporate PAC supporting candidates who advance their interests. Freedom!

Mike Barnicle asked Scarborough a question that a lot of union supporters have been using to push back against “right to work,” but which ignores the fundamental problem with the law:

“Well, you choose, Joe, after being granted the right, not to throw in union dues to the larger employee contribution, would you choose not to take the pay raise that the union negotiates for you three years from now?”

This misses the point. If Joe is not required to pay dues to the union that his workplace voted to have, there won’t be a union, not for long. All management has to do is pay the non-union workers the same as they pay the union workers, and eventually, the workers will have no incentive to pay dues, and there will be no union, and no collective action. Three years from now, Joe will be taking a pay cut so the company can maintain their profits, or get fired if he doesn’t like it.

A union that you don’t have to pay dues to is not a union. It’s like saying, “Hey, I’m all in favor of having an army, I just think you should be free to ignore orders that you don’t like.”

An army, like a union, depends entirely on collective action. You’re free to join it or not, but you’ve still got to pay for it. As a citizen, there are other ways you can try to make changes, but you can’t just opt out of the army.

The “pro-union” Scarborough went on to say that “I think, by the way, unions play an absolutely critical role, especially in an era where the rich are getting richer, and the poor are getting poorer,” and I’m going to take him at his word that this is how he truly feels, that this is not just some feigned innocence aimed at sugarcoating anti-union propaganda. If that is the case, Joe, then stop being anti-union, because that’s what “right to work” is, and that’s what you are.