Mother Of 13-Month-Old Shooting Victim Breaks Down In Emotional Interview With Piers Morgan: ‘I Hope The Shooter Dies’
VIDEO

Mother Of 13-Month-Old Shooting Victim Breaks Down In Emotional Interview With Piers Morgan: ‘I Hope The Shooter Dies’ 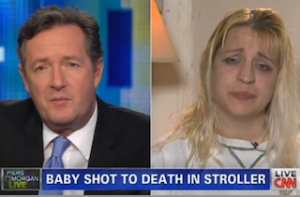 Monday night on CNN, Piers Morgan brought Sherry West onto his show to speak about the tragic killing of her 13-month-old Antonio Santiago that occurred last Thursday in Brunswick, Georgia. Through tears, West described the attempted robbery that ended with the shooting of her baby while he was sitting in a stroller. Police arrested 17-year-old De’Marquise Elkins and an unnamed 14-year-old for the murder on Friday.

Perhaps in an attempt to relate the incident to the larger issues about guns in America that he has been covering heavily since the Newtown, Connecticut mass shooting, Morgan asked West, “what does it say about this country that two young boys could even consider perpetrating such a crime?”

“It’s a shame that our children grow up around children like this and that children can actually grow up and do things like this.” she responded. “I mean, people have to worry about children now, not just adult assailants.”

Regarding the fate of the two young boys in custody, West said that she “hopes the shooter dies. I had to watch my baby die and I want him to die. A life for a life.” For the juvenile accomplice, she advocated “a juvenile correctional facility to age 21 and a consecutive life sentence in state prison.”

Ultimately, Morgan must have felt that the implications of the story speak for themselves and made no further attempts to engage West in the larger, political elements of the story. He ended the segment by thanking West for coming on his show and calling the ordeal “one of the most appalling crimes I have heard of since I have been here in America.” He added, “my heart just goes out to you.”