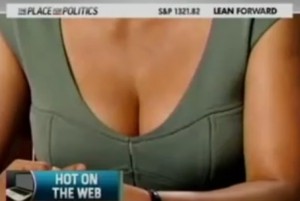 Although they weren’t the first, or only, ones to fall for it, MSNBC deserves some kind of award for its coverage of a hoax study that suggested that men who stare at breasts have healthier hearts than men who don’t. Way Too Early host Willie Geist debunked the story on Tuesday, only to have dayside anchor Contessa Brewer report the udderly ridiculous story in a somewhat serious mien the following day. I guess she didn’t get the…mammo? (h/t The Blaze)

I first became aware of the story when conservative blogger RS McCain tweeted it at me out of laudable concern for my health, but I pointed out that any cardiac benefits derived from staring at breasts would be offset by the respiratory problems caused by all that mace. Understandably excited, “The Other McCain” helped to spread the news like wildfire throughout the conservative blogosphere. You can hardly blame McCain for falling for this. The prospect of healthier living through the eye-lasering of unsuspecting womenfolk carried with it the promise of near-immortality for him.

McCain got the story from Boston’s Fox affiliate, who ran the story last Friday: (In an odd, unrelated detail, Fox 25’s boobie b-roll includes a shot of a woman standing next to what appears to be a Westboro Baptist “God Hates F*gs” sign.)

It’s less understandable that Contessa Brewer gave this story any creedence, considering her own MSNBC colleague’s prior debunkage:

In order to save MSNBC countless hours of time and resources, let me be the first to tell them that Otto Titzling didn’t really invent the brassiere, and there is no such thing as a “Braille T-Shirt.”

All kidding aside, though, Brewer does express skepticism about the ability of the “researchers” to find men who could spend five years avoiding eye contact with breasts, and her “Hey, I’m up here!” gesture underscores the fact that this hoax may seem to be a good-natured poke at a male foible, but the flip side is an uncomfortable eagerness to validate the objectification of women.

Update: A reader, Magister, points out that the sign featured in the Fox 25 clip appears to be a parody, possibly from “Boobquake.” Good eye, Magister.