MSNBC’s Mike Barnicle: Obama’s Problem Is Dealing With GOP ‘Who Don’t Live In The Real World’ 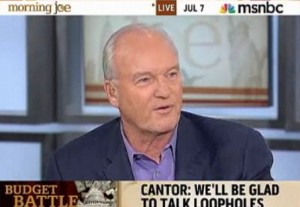 The Morning Joe crew discussed the ongoing budget negotiations and the consensus of the table seemed to be that Republicans were still not willing to go along with a compromise, despite a potential deal with a 5:1 ratio of spending cuts to tax increases, according to The Washington Post’s Ezra Klein. Yet as Mika Brzezinski wondered “are we skewed” in concluding Republicans aren’t putting anything new on the table, Mike Barnicle suggested that President Obama is trying to negotiate with Republicans who do not comprehend “real world” problems.

Yesterday’s Twitter town hall demonstrated to Barnicle that Obama is dealing with questions from the real world, while Republicans continue to be focused on policy:

“He is doing everything he can do to look like he is willing to go the extra mile and paint Republicans to be totally recalcitrant so that if this thing does fall apart, God help us if it does, he will be able to look at them and say ‘look these guys, I was willing to do everything they wanted and yet they still were not willing to make a deal, it’s on them.'”

And with the debt ceiling deadline fast approaching, the rhetoric on both sides is likely to heat up.