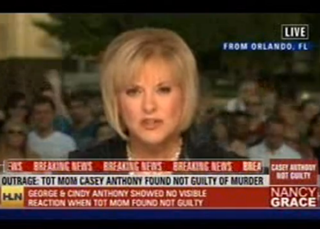 “She’s going to have to live with herself for the rest of her life.” Nancy Grace has, perhaps, taken to the plight of little Caylee Anthony with a fervor unparalleled in the national media, and while she made statements earlier in the day, she seems to have saved her best for her own show. Her outrage was in full force tonight, as was that of the attorneys on her program, who decried the injustice made in setting Casey Anthony free (after a term for lying to authorities).

“She may be celebrating now, but she will ultimately pay,” Grace introduced her segment, and the tenor of her attacks on Casey Anthony didn’t fall throughout the first segment of her program, as she concluded that “the Devil is dancing tonight” before tossing to her even louder, even more over-the-top panelist Susan Moss, who elevated the level of outrage even higher. “We have been O.J.’d!” she shouted, calling the verdict the “worst thing to happen to Florida since the hanging chads.” While fellow panelist Richard Herman refused to blame the jurors– “I will not insult those jurors”– he was pretty much alone on that one. Grace was particularly incensed by the jurors’ refusal to speak to the press, scoffing that “they get on their bus and leave town, literally, back to Pinellas County. It’s over.”

Moss and Grace also found the lack of note-taking suspicious, with Grace finding suspicious that “jurors were sitting with their arms folded just staring blankly in front of them… it was like they had already made their minds up” and decrying the fact that a lack of motive appears to have prevented one juror from believing George Anthony was involved in the death: “the state doesn’t have to prove a motive.”

This was an extremely packed segment, with very high emotions and more than its fair share of disbelief. The whole a-block via Headline News below: