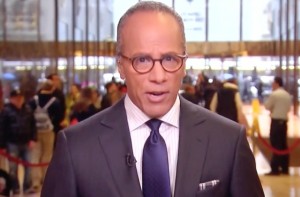 Lester Holt interviewed Donald Trump in Trump Tower tonight, which is fine, but it came with the rather curious decision to anchor the entire NBC Nightly News broadcast from Trump Tower.

It’s not clear why this happened, but whatever the case, Trump Tower was visible in the background during Holt’s live reports on the news of the day, as well as the interior of Trump’s office during the interview.

A lot of people noticed and had a problem with this:

WTF is @NBCNews @NBCNightlyNews and @LesterHoltNBC thinking? You can't anchor your broadcast from Trump Tower! Have they no shame? Ethics?

Lester Holt is anchoring NBC's evening news from the lobby of Trump Tower. And the media isn't a large part of America's Trump problem, eh?

But Trump Tower is a very short walk to 30 Rock. Why could Trump just walk over to NBC? https://t.co/Gq8qgTkdgz

You can watch clips from the broadcast above, via NBC.