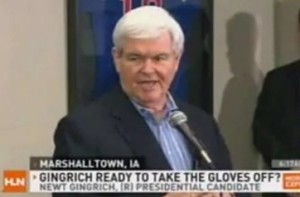 GOP presidential candidate and attack ad pinata Newt Gingrich continued to complain about the millions of dollars in negative ads, many from pro-Mitt Romney SuperPACs, that have taken a heavy toll on his polling numbers. In Iowa yesterday, a reporter asked former House Speaker Gingrich if he felt he was being swift-boated (a reference to the notorious 2004 smear campaign against Sen. John Kerry), and Gingrich replied, “I feel Romney-boated.”

Gingrich said the number of dollars spent on negative ads against him “in a state this size (Iowa)” was “pretty amazing.”

He was asked, “Do you feel swift-boated?”

Gingrich’s rise to the top of the Republican presidential field caught almost everyone off guard, including, it would seem, the former Speaker. Without the campaign cash to counter negative ads, Gingrich has waged a month-long campaign to keep things “positive,” and has complained loud and long about the attacks against him. The attacks seem to have had an impact on his momentum, and while it’s tempting to ask Gingrich “Why don’t you cry about it?,” a recent study showed that 43% of all ads being run in Iowa contained attacks on Gingrich.

There have been some unfair attacks on Newt Gingrich, such as the implication that Gingrich isn’t sufficiently anti-choice, but the most devastating stuff, like his flips on the individual health insurance mandate, is dead on target. Any high ground that Gingrich might have had on the issue of negative attacks is somewhat eroded by his own shots at rivals. The only apparent difference is Gingrich’s inability to project his attacks with campaign ads, which is a function of his own broke-itude, rather than his inherent congeniality.

Every campaign season, political commentators talk about how negative ads, despite being very effective, turn voters off, but listening to a politician whine about them is even less appealing. If you get hit, you hit back. If they put you on a couch with Nancy Pelosi…well, there’s not much you can do to respond to that. Call a wahhh-mbulance?

Here’s the clip, via HLN: