NSA Chief Can’t Explain How Snowden Slipped Through Cracks: ‘Clearly The System Did Not Work’
video

NSA Chief Can’t Explain How Snowden Slipped Through Cracks: ‘Clearly The System Did Not Work’ 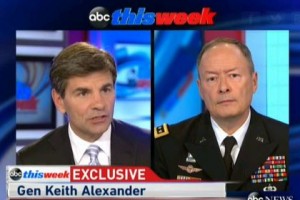 National Security Agency Chief Keith Alexander appeared on ABC’s This Week Sunday morning to denounce Moscow-bound Edward Snowden, but was unable to explain how internal security measures failed to prevent Snowden from making off with so much classified material.

“This is an individual who is not acting, in my opinion, with noble intent,” Alexander said of the leaker. “What Snowden has revealed has caused irreversible and significant damage to our country and allies.”

Host George Stephanopoulos asked Alexander if the government knew how Snowden was able to leave Hawaii with the materials he’d taken.

“Clearly the system did not work as it should have,” Alexander said. “This is an individual with top secret clearance whose duty it was to administer these networks. He betrayed that confidence and stole some of our secrets. We are now putting in place actions that would give us the ability to track our system administrators, what they’re doing, what they’re taking, a two-man rule. We’ve changed the passwords. But at the end of the day, we have to trust that our people are going to do the right thing. This is an extremely important mission defending our country.”

“We have interest in those who collect on us as an intelligence agency. But to say that we’re willfully just collecting all sorts of data would give you the impression that we’re just trying to canvas the whole world. The fact is what we’re trying to do is get the information our nation needs, the foreign intelligence, that primary mission, in this case and the case that Snowden has brought up is in defending this nation from a terrorist attack.”

“Are you confident that we have not broken the laws of Hong Kong?” Stephanopoulos asked.

“I’m confident that we’re following the laws that our country has,” Alexander said. “We have a set of laws that guide how NSA acts; we follow those laws.”

Overall, Alexander defended the phone metadata program as entirely within the bounds of law, citing 300 instances in which phone data had been grabbed for fifty cases, ten of which involved a person in the U.S. (like Najibullah Aziz), but that the NSA had never listened in on the phone call of an American citizen.

“We have not, in a single case, had a place where a government official engaged in a willful effort to circumvent or violate the law,” Alexander affirmed. “Zero times have we done that.”

“We’ve got to move this debate from a political debate to a debate on national security, because that’s what we’re talking about and the security of this country.”

Watch the interview here, via ABC: