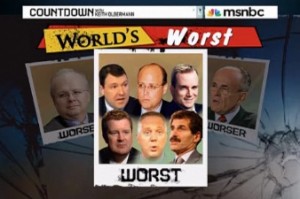 There is a common canard amongst some critics of the president: “oh, so I criticize Obama, and now I’m a racist?” But that allegation seems far less common than its use as a defense, or more precisely, subterfuge. But maybe it is more common than previously thought, evidenced by last night’s “Worst Persons” segment on Countdown, where Keith Olbermann effectively hailed many critics of the president’s State of the Union speech as racists for using “code words” such as “cocky”, “flippant” and “arrogant.”

Olbermann’s implication of racism in this specific style of criticism stands in stark contrast to his MSNBC colleague Chris Matthews, who notoriously claimed that during the speech, he “forgot he was black.” Where Matthews sees a post-racial world in which we no longer see color or ethnic heritage as a difference, Olbermann is still seeing an untoward context to the comments made by his fellow media peers. Text of his comments has been excerpted below:

“…But our winners, these guys, assessing not the speech but the president himself. Eric Erickson, “cocky”; John Stossel said he hoped the president would admit he was, quote, arrogant. Jay Nordlinger, “looks arrogant whether he is arrogant or not”; Mark Thiessen, “defensive, arrogant”; John Hood, “flippant” and “arrogant.” Glenn Beck, “like a punk.”

Here’s a little secret: gathering sadly from witnessing it my whole life even from some in my own family, when racist white guys get together and they don’t want to be caught using any of the popular epithets that are in use every day in this country about black people, there’s a chance one of them or worse still a white guy who doesn’t get it, might wander in and hear the conversation. When there’s a risk even in saying uppity or forgetting his place, the racist white guys revert to euphemisms and code words and among the code word that they think they’re getting away with are “”cocky, flippant, punk, and especially arrogant.”

What Olbermann fails to recognize is that the State of the Union speech, like any presidential moment, is nearly always viewed through one’s own political bias. So, where supporters of Obama see an unflappable and unassailable confidence, his detractors see arrogance and cockiness. There doesn’t have to be anything racial about it, and to claim that these, or any, critiques are axiomatically based in some sort of racial prejudice is, well, race-baiting.