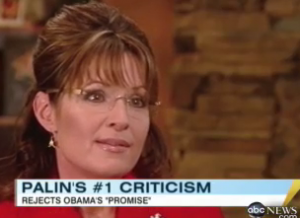 In an interview this morning on ABC’s Good Morning America, Sarah Palin came out swinging, calling President Obama‘s tax cut deal with Republicans not compromise, but a sign he’s a “flip-flopper.”

As for a recent Wall Street Journal/NBC News poll that show the former Alaska Governor trailing President Obama badly in a head-to-head 2012 matchup–fully 22 points behind-she says it’s way too early to give it much thought:

“A poll number like that, it’s like, ‘Oh yeah, that doesn’t look really pretty today,’ but a primary is months and months in the process, and there are thankfully many debates,” she said. “And if I were to participate in that contested primary — you know, it — I would be in it to win it.”

Will she run? Palin says it’s a “prayerful consideration,” and it won’t be made for some time–“many months down the road.” The final decision, she said to ABC’s Robin Roberts, would be made thoughtfully:

It’s a prayerful consideration because, obviously, the sacrifices that have to be made in order to put yourself forward in the name of public service is, it’s brutal,” she said in the interview at her home in Wasilla, Alaska.