O’Reilly To Stossel: Most College Profs Are Liberal, We Need ‘Affirmative Action For Conservative’ Profs
video

O’Reilly To Stossel: Most College Profs Are Liberal, We Need ‘Affirmative Action For Conservative’ Profs 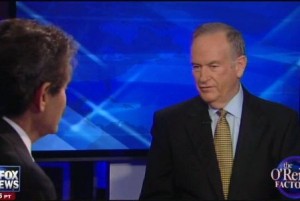 Bill O’Reilly came out in favor of affirmative action tonight. Not affirmative action based on race of social status, but on political ideology. O’Reilly looked at the rising trend of college faculties being majority-liberal, and said that while at private universities this is not a bit deal, it is a serious problem for state universities, which are paid for with taxpayer dollars. John Stossel differed with O’Reilly, sticking to his limited-government guns and not wanting any more intervention in the school system.

RELATED: Bill O’Reilly Confronts Professor Who Accused Him Of Engaging In ‘Right-Wing Buffoonery’

O’Reilly brought up a new study finding that almost half of all college professors identify as liberal, and asked if there “should… be a balance of ideological thought in the classroom.” As an example, O’Reilly brought up Robert Thurman, a liberal professor who happens to be the father of actress Uma Thurman.

O’Reilly said that by letting so many liberal professors to openly get political with their students, taxpayers are seeing their money spend in a irresponsible manner. He proposed “affirmative action for conservative thought on campus.” Stossel said that such a move would result in liberals “scream[ing] McCarthyism,” though he did agree with O’Reilly that having so many professors of one particular political agenda is troubling.

Stossel suggested that taxpayers should just stop paying for state universities, suggesting tuition would be lower as a result. O’Reilly argued that such a system makes it easier for poor students to get into good schools.

O’Reilly continued to insist there is nothing wrong with a “little balance,” and Stossel agreed that it’s “evil” that taxpayers have to “pay for ideas that we despise.” However, Stossel disagreed with with O’Reilly’s affirmative action proposal, saying that he doesn’t like the idea of more government getting involved in the education system.