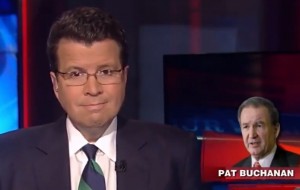 Former Republican presidential Pat Buchanan called into Neil Cavuto‘s show Friday to weigh in on the latest volley fired in the GOP’s civil war, specifically the massive manifesto published by right-wing standard-bearer The National Review, bashing Donald Trump as unworthy to lead the conservative cause. The Review, he said, “gave up any pretense of objectivity” when it went after Trump.

As a result of the decision to publish the volume of anti-Trump screeds, the Republican National Committee disinvited the Review from its February debate.

Buchanan said that the Review only gave a boost to Trump by augmenting his role as someone who successfully stands up against the Establishment.

Cavuto somewhat speciously countered that the Republican Establishment, rather than aligning itself with the Review, had cast its lot with Trump, since it disinvited the magazine, not Trump, from the debate. (On what grounds, exactly, would they disinvite the party’s leading candidate?)

Buchanan saw no controversy in the RNC’s decision:

You can’t come on there and act as though you’re sort of a neutral observer or a journalistic observer when you’ve taken a stand saying this man ought to be defeated — and you’re sitting down there questioning him. The National Review gave up pretense of objectivity in that debate when it took this position, and I assume it knew it going in

Indeed, Review publisher Jack Fowler said in a statement: “We expected this was coming. Small price to pay for speaking the truth about The Donald.”