Pat Buchanan To Charlie Rose: Critics Should Read My Book, Instead Of Trying To Censor It
video

Pat Buchanan To Charlie Rose: Critics Should Read My Book, Instead Of Trying To Censor It 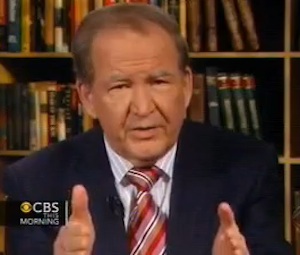 Appearing on CBS This Morning, former MSNBC contributor Pat Buchanan spoke with Charlie Rose and aggressively defended his book from charges that it is racist.

“What I’m warning about in our country,” Buchanan observed. “Is that the United States of America — which is shifting to become a multicultural, multinational, multiethnic, multilingual country — there is nothing that’s going to hold us together if we lose our common language, our common Judeo-Christian faith, our common moral consensus, which we are losing.”

“So you’re not saying that the nation has to be white and Christian, which some of your critics believe you are saying?” Rose pressed.

“Critics should read the book instead of trying to blacklist and censor the book, Charlie,” Buchanan fired back. “No, any individual can be a good American,” Buchanan explained. “When I was a young man in 1960, because of the melting pot we had all come together: Irish and Germans and English and Polish and Jewish and Czech and Greek, into one nation and one people under God. But the culture and all the things that held us together, we have thrown out. The public schools which introduced us to English literature, American history, American heroes and holidays, that’s thrown out. We’re becoming a Tower of Babel, and I don’t think we can survive as a great nation, or one republic, under God, indivisible.”

“But I thought what America meant was diversity,” Rose argued. “I thought what the Statue of Liberty meant if we welcome everybody to our shores that that is what has made us strong because people have come from outside the United States to make giant contributions in war and peace to make us the strong country that we are, and that is what our essential power — that is what has given us enormous strides in technology, in science, in health, and, yes, in fighting the wars that we felt were necessary for our national security.”

“Charlie, what is the motto of the United States?” Buchanan countered. “E pluribus unum: out of many, one. It is not just the diversity that makes America strong. It is the unity we finally had in the Depression and World War II and in the 1950s. We were one people, united, under God, indivisible, in one nation. What is happening now is that the elites in this country have taken the melting pot and thrown it out. They’re saying to people, come to America, keep your culture, keep your separate religion, keep your separate different beliefs. America is becoming a nation of nations.”

Watch the interview below via CBS: