Pat Robertson: Women Get Abortions To Get On ‘Level Playing Field’ With Lesbians 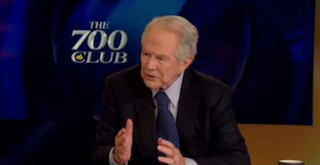 Admit it: lesbians rule the world. Everywhere you look, these titans of industry are running companies, controlling countries, and deciding the direction our society will take. How, then, are poor straight women supposed to catch up to their lucky Sapphic sisters? Well, by getting abortions, of course! At least, this is the logic that Pat Robertson seemed to be working with this morning on The 700 Club.

Meeuwsen: There are lots of government-funded agencies in this country. Why do you think the President picked that one above all else to say, ‘not one penny’?

Robertson: Well it’s the left; it’s this culture of death. The far-left is livid about killing babies. They want to kill do this, they want to destroy. You go back, and I don’t want to play all this psychological stuff but nevertheless, if a woman is a lesbian, what advantage does she have over a married woman? Or what deficiency does she have?

Meeuwsen: Well she can’t have children

Robertson: That’s exactly right. And so if these married women don’t have children, if they abort their babies, then that kind of puts them on a level playing field. And you say, nobody’s there to express that? Isn’t that shocking, well think about it a little bit ladies and gentlemen.

I mean, he’s got kind of a point in that wanting a career instead of a child is one reason someone might get an abortion, but since when are lesbians so privileged in our society that straight women our lagging behind?

Wait a second! This actually helps prove a theory I’ve had since Robertson kind of, sort of said pot should be legal: Pat Robertson is actually a secret Ultra Liberal. He’s so progressive that he exists in a world where homosexuals aren’t prejudiced against! Not only that, they actually have an advantage! Gosh, this guy makes Michael Moore seem like Ronald Reagan!

It makes so much sense. Clearly we’ve all been watching The 700 Club totally wrong.