Piers Morgan, Dana Loesch Burst Into Shoutfest Over Gun Control: ‘How Many Deaths Are Okay To You?’
video

Piers Morgan, Dana Loesch Burst Into Shoutfest Over Gun Control: ‘How Many Deaths Are Okay To You?’

Piers & Loesch Burst Into Shoutfest Over Gun Control: 'How Many Deaths Are Okay To You?' 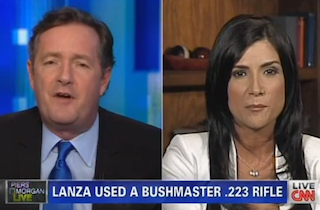 Piers Morgan‘s show got heated on Thursday night when he invited Dana Loesch, Grover Norquist, and Van Jones to debate gun control. At one point in the segment, Loesch and Morgan grew especially frustrated as Loesch pressed the CNN host on where he draws the line on the number of gun deaths that are okay.

Morgan went off the “outrageous” and “insensitive” NRA leadership, going on to cite statistics about gun-related deaths in the country, compared to those in other countries with stronger gun laws. Often making this comparison on the show in the past, Morgan stressed that those countries have “negligible” gun-related deaths. How, he asked, can that be explained in “any rational way”?

Norquist advocated comparing “apples and apples” and looked to countries like Brazil, which has significant gun crime as well as significant gun laws. It’s not a panacea, he argued. And there began the crosstalk and disagreement as Jones disputed some of the figures Norquist presented, deeming them plain old wrong.

Jones went on to focus on how the issue is about assault weapons specifically, which Loesch immediately called a “false premise.” Seeking to correct his perspective, she argued, “Military-style assault weapons are not out on the street. We are talking about semiautomatic weapons…let’s stop conflating.”

“There is a deliberate effort to conflate the types of firearms,” Loesch insisted, noting that just because a gun “looks scary” doesn’t mean it can be categorized that way. She and Morgan later clashed over what qualifies as an assault weapon, with Loesch quipping that even a spoon could be labeled one.

She further dismissed the argument about magazine capacity and criticized those who she felt are simply seeking to disarm people. Jones jumped in again to fire back at logic that doesn’t “make any sense” — like spoons. We’re talking about “funeral after funeral after funeral.”

“How many deaths are okay to you?” Loesch asked Morgan. “Answer that question.”

As he sought to argue how a seven-round magazine is different from a 30-round magazine, she interjected, “So seven is okay with you then.”

Loesch repeated the same, asking, “Where do you draw the line at preventing the death of children, Piers?”

“I would love to draw the line at zero.”