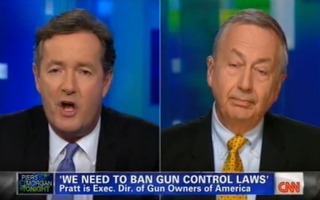 CNN’s Piers Morgan blasted guest Larry Pratt on his show Tuesday night, him an “idiot” and a “dangerous man.” At one point, Morgan, visibly angry, said to Pratt, “You’re an unbelievably stupid man, aren’t you?”

Morgan, who has long been an advocate for increased gun control in America, slammed Pratt’s logic as “complete and utter nonsense” and accused him of being “facetious.” Pratt claimed gun control laws were the problem because they “keep people from being able to protect themselves.” He also said banning weapons is ineffective:

“That doesn’t work, doesn’t even work in England. You have mass murders there all over Europe. There have been mass murderers.”

Morgan responded that the statement was an “absolutely lie,” citing the vast difference in murder rates between the United States and countries like Britain or Australia. He tore into Pratt, saying:

“I just want you to answer this one question. Post what happened at Sandy Hook, your answer to this problem of repeated use of this weapon with these high-capacity magazines is to continue letting Americans buy them with impunity, and to not concern yourself with these mass shootings, is that right?”

Pratt continued to espouse his view that “laws that prohibit self-defense” are the problem. Piers attempted to wrapped the interview by saying, “I know why sales of these weapons have been soaring in the last few days. It’s down to idiots like you.” Pratt quipped back, “Thank you for your high-level argument, Mr. Morgan. It’s really good.”

“You know what, you wouldn’t understand the meaning of the phrase high-level argument. You are a dangerous man espousing dangerous nonsense. You shame your country.”

Watch below in two parts, via CNN:
Part One: