Riding The Crazy Train: Gingrich Gets Aboard The ‘Blame Secular Culture For Mass Shootings’ Bandwagon 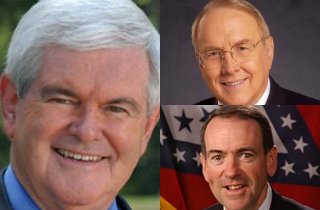 Yet another Christian conservative public figure has taken it upon themselves to blame last week’s senseless Newtown shootings on a “secular” culture that has purportedly removed God from the classroom and allowed children to run wild in the streets (their parents’ basements) playing those ungodly video games that inspire them to go out and kill a bunch of innocent school children and teachers.

Instead of emphasizing the fact that shooter Adam Lanza was, shall we say, crazy — or perhaps mentioning that we, as a culture, are afraid to talk about mental health issues because of a majority that is wary of “pscyho-babble” — former House Speaker Newt Gingrich got aboard the Huckabee train and metaphorically took the gun out of Lanza’s own hands and placed it in the hands of “secular” folk and their “dehumanizing” video games and movies.

Appearing on Brian Thomas‘ radio show on 55KRC in Cincinnati, Gingrich echoed the sentiment of other religious public figures who have a compulsive need to blame “secular” society-at-large for one man’s violent act:

“When you have an anti-religious, secular bureaucracy, and secular judiciary seeking to drive God out of public life, something fills the vacuum. And that something, you know — I don’t know that going from communion to playing war games in which you practice killing people is necessarily an improvement.

Oh, but you kind of are. And you are kind of absolutely wrong. But anyway… we need more commissions!!!:

“But I think Joe Lieberman’s right. Let’s have a genuine national commission, but not just on guns — which is what the left wants to do. Let’s ask a question about why have we become a society in which so many people have no faith in the future, no belief in themselves, in which they don’t see their fellow Americans as human beings, but see them as objects? That’s a national dialogue that I think would be very healthy.”

Yes, because that’s what we need. Yet another commission, paid for by taxpayers, in which sanctimonious congressmen get on their soapboxes and point fingers at the makers of Halo or some atheist society or some movie that once showed a bunch of people get killed at once. That’ll absolutely change the culture.

For someone like Gingrich who supposedly believes in “limited government,” he seems to have an awfully strong faith in the power of central planners to “change the culture” and collectively “harrumph” cultural forces into being less cultural or whatever.

The host, Brian Thomas, then chimed in to note that Microsoft supposedly once said that people have collectively spent five billion hours playing Halo. The horror:

“That’s five billion hours that, I would argue, is completely wasted, has nothing to do with God, religion, understanding, you know, even connection with fellow human beings.”

Ah, there’s the rub. Video games take you away from time spent reading the Bible, clutching your pearls about the War on Christmas, and going to confession.

And, as we all know… unlike those secular video games, the Bible would never depict graphic sexual acts or mass slaughter.

Listen below to audio, via: