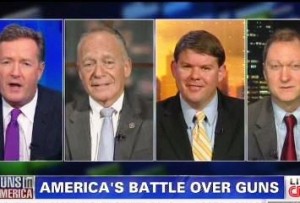 Piers Morgan is getting sick and tired of having the same “ridiculous debate” every time there is a mass shooting, and made that abundantly clear when he unloaded on conservative radio host Ben Ferguson and gun rights activist John Lott during a heated argument over gun control Monday night.

Ferguson told Morgan the Navy Yard was a gun-free zone, so gun control was “a failure in this base with all the best security in the world.” Morgan complained that the bigger failure is the “failure to do anything” in the wake of countless tragic shootings. After Richard Feldman brought up the lack of a real conversation on mental health, Morgan cried, “You guys just never accept that the gun itself can never be part of the problem!”

Lott argued that gun-free zones are “magnets” for tragedies like this to occur, and fought with Morgan over the accuracy of gun massacre statistics. Morgan also shouted down the idea that a military installation was a “gun-free zone,” pointing out the armed security the NRA wanted after Sandy Hook was present at the base “and it made absolutely no difference!”

Ferguson shot back that if someone is in the Navy and being trusted with hi-tech equipment and classified information, “why the hell wouldn’t we trust you to bring your weapon to work with you?” Morgan sighed and scolded the panel for being so intransigent in their views about guns. He shouted, “Think about your position! Think about how it helps save American lives! Because it doesn’t! More guns is not the answer!”