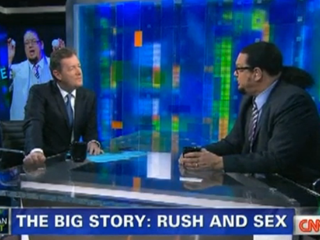 The nation has been inexplicably captivated over the past few days by none other than Rush Limbaugh, who called a student a “slut” and a “prostitute.” While most of what has been inspired in the wake of this news cycle has been moralizing statements and boycotts, it inspired in Piers Morgan one of the more entertaining rants he has ever given on his show, calling Limbaugh a “ridiculous old man” and confessing to a desire to pry into his own sex life.

Morgan’s guest for the night was Penn Jillette, which, as Jillette noted, didn’t really make for any heated argument since the two agreed on Limbaugh’s take on sex. Jillette did admite that “I’m just excited to have ‘Rush and Sex’ below my picture,” referring to the chyron, and unlike Morgan did not think that Limbaugh’s argument was new or brought any innovative thinking to the discussion. “He just made explicit what is implicit in the argument,” he explained, that “sex is bad.” To Jillette, the only new thing about the argument was that Limbaugh “just used cruder and very impolite and offensive words.”

“Who thinks that sex is bad?!” an incredulous Morgan asked. Jillette tried to explain that many people thought it was bad, but was caught off by Morgan’s anger. “He sounds like some archaic Dickensian dinosaur… we’re in 2012, you ridiculous old man!” He then mused, “I would love to know how many people Rush Limbaugh has sex with,” and turned to Jillette for more analysis, but he admitted, “I stopped listening after you said you wanted to know about Rush having sex.” After thinking about it for a few seconds, he changed his mind. “I’ll go watch Rush Limbaugh have sex with you.”

Jillette reiterated the point that the problem was there were people who believed that sex was bad, a point that Morgan still refused to believed. “There can’t be anyone in the world who genuinely thinks sex is a bad thing,” he repeated. On the morals, Jillette couldn’t find any argument with Morgan. “I agree with you on everything,” he concluded, “except knowing about Limbaugh’s sex life– which I balked at, but then jumped on board with you.”