The Five Must-Read Odes To Andrew Breitbart From His ‘Enemies’

The Five Must-Read Odes To Andrew Breitbart From His ‘Enemies’ 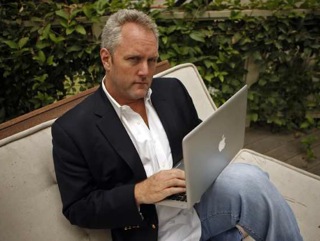 French rabble-rousing sophist (in the most complimentary way, of course) Voltaire, an avowed atheist, joked that God had answered his only prayer: “O Lord, make my enemies ridiculous.” If Andrew Breitbart had prayed for the same, the way the media has worked overtime this weekend to make sense of his legacy proves that he only got it half answered. Some celebrated, using Breitbart’s refusal to forget the Chappaquiddick tragedy upon the death of Ted Kennedy as an excuse. But among those Breitbart seemed to consider among his dearest enemies– the ones who got colorful nicknames and fake TV shows on Twitter– the reaction to his passing has resulted in some of the wisest words on 21st century rhetorical warfare.

Alex Pareene: “It wasn’t actually about “politics” for Breitbart, really”

Back in his Gawker days, Salon’s Alex Pareene received one of Breitbart’s more colorful insulting nicknames, “Appletini partyboy ‘Pareene’ from Denton’s gilded Soho nihilism-as-journalism sweatshop.” He didn’t have many nice things to say about Breitbart professionally. He calls the Big sites “ridiculous” and “ugly” but doesn’t quite blame Breitbart for what he became, noting that Breitbart was liked because he was “manic and gregarious,” but the political warfare got to him. It is unique in that it is one of the few pieces by those who disliked his politics that portrays him as more of a casualty than a naturally negative being, though still calling him a “toxic influence in the national discourse”:

He has a number of friends from those early blog days who were dismayed at the turn his career and life took, but it was sort of inevitable — the conservative movement grooms its superstars into full-time foot soldiers, and the fight is as much a lifestyle as a job. His finishing school was the right-wing Claremont Institute, where he learned about the intellectual forefathers of the movement he semi-accidentally fell into and found an excuse to get into fun arguments at parties full of the coastal liberals he nearly always hung out with. […]

It wasn’t actually about “politics” for Breitbart, really. He didn’t care what the top marginal tax rate was. He didn’t see any sort of contradiction in supporting gay rights and drug legalization while working for the election of Republicans. It was about fighting and bomb-throwing and arguing and winning a war against an enemy he built up in his Hollywood-inspired imagination to be massive and powerful. Because that enemy was in his imagination duplicitous and evil, he could justify all sorts of awful behavior on his own part.

Conor Friedersdorf: “I sometimes marveled at his ability to advance a story, even if I’d discourage others from mimicking his approach”

Of all the people Breitbart had nicknames for, Friedersdorf (or StinkyFreakyCondor®, to Breitbart), was probably the one that got the most creative ones, in part for his work at The Atlantic with Andrew Sullivan and in part for writing columns with headlines like “The Flaws of Breitbartism.” Friedersdorf compiles some of the best profiles of Breitbart and adds his own experience of debating “almost opposite codes of conduct.” The best part of this memorial piece, though, is that it mentions (rightfully) one of Breitbart’s funniest and most innovative political jokes:

Perhaps my favorite Breitbart contribution to Web journalism was Retracto, The Corrections Alpaca, for it captured the man’s mix of humor, capacity for innovative, attention-grabbing stunts, and righteous indignation at the media; at his best, he was a sharp press critic; at his worst, an aggressive bully who held his adversaries to a higher standard than he met as a publisher.

Andrew Sullivan: “He wanted to bleed and show the world the wounds”

In life, Breitbart called Andrew Sullivan, who spent a great deal of time attack Breitbart ally Sarah Palin, an “incomprehensible ‘marm” and suggested he “get a townhouse” with Charles Johnson (that is a big insult coming from Breitbart, and Johnson is also on this list). Sullivan write a piece letting others look at Breitbart’s legacy in specific terms, but himself commented more on what it means to have someone this young and this wired into the internet die of what appears purely stress. He sees a bit of himself in Breitbart’s lifestyle, and wonders whether others will learn to adjust their lifestyles:

There have been times writing and editing this blog on that kind of insane schedule for more than a decade when I have wondered who this new frantic way of life would kill first. I do not doubt that Andrew tried to keep a balance, and stay healthy, but like the rest of us, became consumed with and overwhelmed by this twittering, unending bloghorreic chatter. It takes a much bigger physical, emotional and spiritual toll than most realize, and I’ve spent some time over the years worrying it could destroy me. […]

And when you are on that much, and angry to that extent, and absorbed with that kind of constant mania, and obviously needing more and more validation, and on the online and real stage all the time, day and night, weekends and weekdays … well, it’s a frightening and dangerous way to live in the end.

He is in that sense our first new-media culture-war fatality. I fear he won’t be the last.

Touré: “The battlefield of American political thought has lost a loud, weird knight”

Like many who Breitbart spent attacking mercilessly on Twitter, Touré admits in his eulogy that he didn’t quite understand why Breitbart “wasn’t trying to fry bigger fish,” why he dedicated so many hours to the fictional show “That Broccoli is Racist! with Touré,” how exactly he was supposed to respond. His piece is not just notable for the grace with which he touches upon what he meant to Breitbart in life, but because it makes an eloquent argument for a truth that few in the political world are willing to admit: in the greater scheme of life, death, and eternity, political disagreements aren’t all that important:

Even though he considered me an enemy, I imagine that if we’d ever found ourselves in the same airport, we would’ve been able to have a drink and a good time. I cannot say the same for many other people who see me as an enemy. So now that he is gone, I raise a glass and salute my departed enemy. The disagreements we had in life are no longer relevant. He is not here, so why continue fighting with his legacy? Death is disruptive. It changes life for the rest of us. The battlefield of American political thought has lost a loud, weird knight. I’m not going to joust with his ghost. I don’t think questions of conservatism and liberalism remain relevant when the conversation turns to mortality. I don’t envision souls in heaven caring about the winds of national politics. (Surely those in hell have far greater worries.)

Charles Johnson: “I’m a bit sad that he won’t be ranting any more on Twitter about my ‘magic ponytail'”

The shortest, sweetest, and perhaps least ornate of this bunch, Johnson– or “Jazzy the Amazing Ponytail Man,” as Breitbart called him— was a constant thorn in Breitbart’s side, one of those figures that he attacked mercilessly while many at first were left to scratch their heads and who he was or why. His goodbye hits every important response from those who disagreed with him: good words in private, the polite but still there admission that some of the battles he is glad won’t happen any longer, the fond recollection of being insulted colorfully:

We were friends once, but that ended when I could no longer stomach the right wing extremism that Andrew chose instead to embrace. I’m a bit sad that he won’t be ranting any more on Twitter about my “magic ponytail,” but some of his other, more venomous insults I must confess I won’t miss at all.

From all accounts, Andrew was a good family man who loved his wife and children, and I want to extend my sincere condolences for their loss.