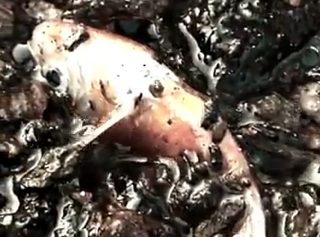 Herman Cain is no longer running for president because of a bizarre and embarrassing series of accusations involving several former employees, but during his time now on the sidelines, he has done little to dissuade Rachel Maddow and anyone else who engaged the theory that his breed of political activism is more performance art than ideology. Yes, he is planning a Beck-style rally in Washington, and still making weird YouTube videos, and his latest is of Mark Block smoking-levels of surreal.

Obviously inspired by Lyndon B. Johnson‘s “Daisy” ad, a small girl in a mountainous field empties the contents of a fishbowl on the ground. She describes the goldfish inhaling air, writhing and desperate, as the economy. She dumps more water over it, water that slips off and get absorbed into the ground. The second batch of water, she explains, is the stimulus package. They she yells “any questions?” to no one in particular, as she is completely alone in this mountainous field– except for the goldfish, of course– despite being very young.

The analogy is astute and focusing on the economy– a legitimate issue that, in a universe where the media followed stories based on import, would receive 24/7 coverage– makes it one of the better ideological statements of this week (given that most of the news cycle this week has been about birth control). But it’s just so weird. The aesthetic makes it feel more like a deleted scene from Un Chien Andalou, not a serious economic argument from a former presidential candidate. We can only hope it is one in a series, because six more months of Romney SuperPAC ads and “family values” tiffs seems unnecessarily cruel given the excitement of the field just six months ago.

Watch the clip from Cain Connections below: