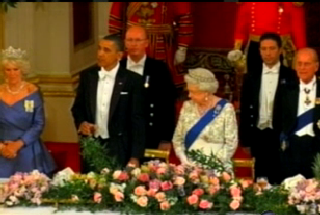 President Obama’s lack of experience with royalty was on full display today in England as he mistakenly began a toast to the Queen of England at the wrong time, resulting in “God Save the Queen” blaring over his words and no one getting to drink what was in their cups. Awkward.

“And now I propose a toast to the Queen,” President Obama began in London today, but only got as far as “To the vitality of the special relationship” before “God Save the Queen” cut him off. He kept reading the toast, however, and finally raised his glass to her. No one drank out of their glasses afterwards, however. The Queen herself looked over at him with a hint of contempt (confusion?) in her face, while the other members of the royal family stood stoically around them.

Many may see not knowing the tedious etiquette of proposing a toast to an ornamental political figure a “gaffe,” but isn’t the entire point of America not bothering to care about royal etiquette? Allahpundit at Hot Air has some (rare) praise for the President:

Protocol, apparently, requires the toastmaster to wait until after “God Save the Queen” plays and then begin the toast. But the almighty O waits for no sovereign, so he launched straight into his shpiel. To which I say, good for him. What else was the American revolution about, if not the right of the president to half-ass some formulaic niceties about the British monarch? He should have punctuated it with a weary “whatever” and downed the glass in one gulp.

Video via ABC News below: