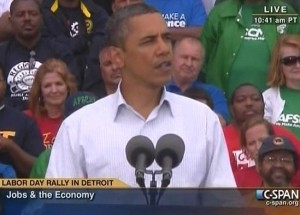 President Barack Obama used today’s Labor Day address to preview Thursday’s jobs speech and to ask the Republicans in Congress to put country before party. He did not, to the dismay of many, address Teamster head Jimmy Hoffa Jr.‘s remarks from earlier in the day wherein he rallied union workers to war with the Tea Party.

“We’ve gone though a decade where wealth was valued over work, and greed was valued over responsibility. And the decks were all too often stacked against ordinary folks in favor of special interests,” said Obama at an event sponsored by the Metropolitan Detroit AFL-CIO. “America cannot have a strong, growing economy without a strong, growing middle class and without a strong labor movement,” he continued in appeal.

Following last week’s stagnant jobs report, he offered that “there is work to be done and there are workers ready to do it. Labor is on board. Business is on board”– and, in anticipation of Congress’s return to session next week, he continued– “we just need Congress to get on board. Let’s put America back to work.”

Teasing next Thursday’s much embattled jobs speech, he called on the GOP to put the struggling country ahead of their party, and urged Congress to move quickly in creating new jobs:

“Prove you’ll fight just as hard for tax cuts for middle-class families as you do for oil companies and the most affluent Americans,” he demanded, addressing the GOP’s claim that they are a “party of tax cuts”: “Show us what you got.”

Watch the full address below: