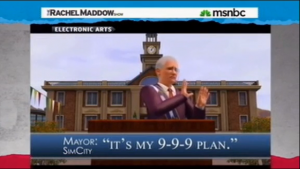 Thursday night on her program, MSNBC’s Rachel Maddow took on Herman Cain, opining that “what the media treats as gaffes” on his part are really “too perfect” to be mistakes. In fact, she described these so-called gaffes as being more like “a sort of genius, obscure, has-to-be-deliberate cultural reference.” Explain, Ray Ray!

Maddow submitted her ongoing thesis project: Herman Cain really may be continually referencing art. Although, you know, one might be tempted to take issue with her using the television series Glee as an example of an art form. (Ratt, however? Definitely a masterpiece.)

She lead viewers through a list of Cain’s many cultural references:

RELATED: Maddow Kicks Herself For Not Realizing Herman Cain Is A Performance Art Project

1. A song from the Pokémon movie.
2. Computer game Sim City’s own 9-9-9 plan.
3. Rush Hour 3‘s oft-quoted “brother from another mother” line. [Although, in all honesty, I don’t think that’s where the phrase originated. Correct me if I’m wrong, my sisters from other misters.]
4. The “We need a leader, not a reader” line, apparently paraphrased from a similar line (uttered by a president) in The Simpsons Movie

“This is not just an art project,” said Maddow. “This is a really good art project. It is complicated, it is widely sourced, it is pulling from movies and songs and video games and even TV shows that were turned into movies.”