Rand Paul: I Would Support a Muslim President, But Would Have Some Questions First
video

Rand Paul: I Would Support a Muslim President, But Would Have Some Questions First 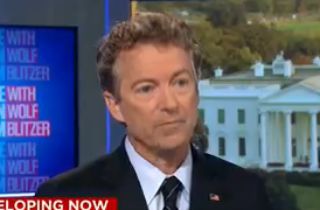 During his appearance on The Situation Room today, Wolf Blitzer asked Rand Paul for his thoughts on Ben Carson‘s recent controversy over not advocating a Muslim president.

Paul stated that there are Muslims who have made meaningful contributions in Congress, and that he would support one for president. However, Paul noted that voters would probably have a couple of questions for such a candidate regarding how they would reconcile Islamic views with the public law.

“‘Do you believe literally that a woman should be stoned to death for adultery? Do you believe when someone steals something, their hands should be cut off?'” Paul asked hypothetically. He also noted how primarily Islamic nations don’t have great track records when it comes to violence and the treatment of women.

Paul later stated again that he he would support a Muslim for president if they supported America’s constitutional principles first and foremost, but thought up a few more questions people might ask about what the Koran says the law should be:

“These are important questions to ask if you have someone who is Muslim running for office. Do you think violence is okay? Do you think Shariah law should be the law of the land? Do you think that the 9/11 bombings were ok? For goodness sakes, I surely wouldn’t vote for any Christian or Muslim that thought that violence was the way to shape your religious views.”

You can watch the segment here, via CNN: