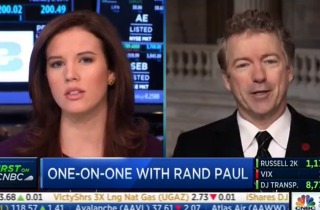 From the beginning of the interview, it became clear Evans was ready to pounce on the senator for a variety of issues. She began with his Monday morning remarks to Laura Ingraham that most vaccines should be voluntary.

“Did you really just say [that]?” an incredulous Evans asked.

“I guess being for freedom would be really unusual,” the senator replied. “I guess I don’t understand the point of why that would be controversial?” When Evans insisted it was a problematic view to hold, given the recent instances of measles at Disney theme parks, Paul explained that he is not opposed to vaccines themselves, but to the idea that government must force everyone to take them. (An important distinction that gets lost in the conversation about actual anti-vaccine “truthers.”)

“I’m a big fan,” Paul said of vaccinations, “but for most of our history they have been voluntary.”

Pushed further, he added this money line that ought to get a rise out of many civil libertarians:

I think they’re a good thing but I think the parent should have some input. The state doesn’t own your children; parents own the children and it is an issue of freedom.

Evans then pivoted to Paul’s proposed corporate tax holiday (co-sponsored by liberal Sen. Barbara Boxer), and that discussion was somehow tense as well. The anchor pushed back on his proposal by suggesting “most of the research indicates that these [holidays] actually cost more money over the long term than they save.”

Sen. Paul was not pleased. “Your premise and your question is mistaken,” he said. “Most of the research doesn’t indicate that.” He pointed to a study from a former Clinton official that suggests the 2005 tax holiday was a net gain. But then the pair got into some tough crosstalk with the senator shushing his host and asking her to “calm down a bit here” as she continued to prod him on his proposal.

And the tension didn’t end there. Evans confronted the senator about a possible “conflict of interest” in a fight he had with the American Board of Ophthalmology over re-certification.

“Once again you’re mischaracterizing and confusing the whole situation,” the senator tore into Evans. “You have taken an interview and made an interview into something where we got no useful information because you were argumentative and you started out with so many presuppositions that were incorrect.” He explained that his fight with the board had nothing to do with helping family and friends avoid re-testing, but rather a struggle over competition and fairness in the certification process.

And when Evans closed the interview by asking Paul the requisite “Are you running in 2016?” question, he handed her another scolding:

We’re thinking about it and we’re looking around the United States and seeing if the message resonates. Part of the problem is that you end up having interviews like this where the interview is so slanted and full of distortions that you don’t get useful information. I think this is what’s bad about TV sometimes so, frankly, I think, if we do this again, you need to try to start out with a little more objectivity going into the interview.