Rep. Peter King Calls For Arrest Of Glenn Greenwald: Freedom Of Press ‘Cherished,’ But ‘No Right Is Absolute’ 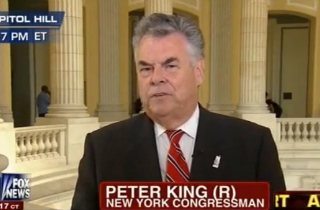 Appearing on Fox News’ America Live this afternoon, Rep. Peter King (R-NY) called for the prosecution of Guardian journalist Glenn Greenwald for his reporting on the classified National Security Agency information given to him by whistleblower Edward Snowden. The Republican congressman also likened Greenwald’s reporting to a hypothetical situation wherein World War II-era reporters had revealed the time and date of the so-called “D-Day” invasion, suggesting he believes the Guardian reporting is tantamount to treason.

“Not only did [Greenwald] disclose this information, he said he has names of CIA agents and assets around the world and threatening to disclose that,” King said when asked by host Megyn Kelly why he wants to prosecute the reporter. “I think [prosecuting reporters] should be very targeted and very selective and a rare exception. In this case, when you have someone who discloses secrets like this and threatens to release more, yes, there has to be legal action taken against him.”

He then asserted: “This is a very unusual case with life-and-death implications for Americans.”

Kelly asked the congressman what the difference is, then, between Greenwald and others who report on leaks, such as Fox News reporter James Rosen, who was famously targeted by a Department of Justice investigation for his role in reporting classified information about North Korea.

“Rosen never said he would release information that could kill Americans and release CIA operatives around the world. That, to me, is an attack against Americans, putting American lives at risk,” King replied.

He then charged that while “freedom of the press has to be cherished,” he believes that “no right is absolute.” King then made up a hypothetical situation from World War II to illustrate his belief that Greenwald acted in order to harm the United States:

“Think of June 5th, 1944, somebody threatening to release the date of the D-Day invasion that would result in this deaths of thousands of Americans. To me, that crossed the line. It clearly does violate U.S. code to talk about releasing classified information. There is a law out there. I agree, when it comes to reporters, it’s used very sparingly and should be. This is a very unusual case.”

King continued on to accuse Republicans who defend Snowden and Greenwald as having “become Michael Moores.” Asked whether he wants to prosecute Greenwald for what has already been leaked, King said, “It should be considered. This is putting American lives at risk and clearly done to hurt Americans. To allow it to be done it will cause grave consequences to the United States. I’m tying the two together and that shows his motivation.”

Only In America can a renowned and devoted terrorism supporter like Peter King be the arbiter of national security and treason.