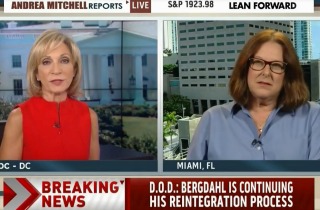 Carol Rosenberg, a reporter with the Miami Herald who closely covers events at Guantanamo Bay, noted on Monday in an interview with MSNBC’s Andrea Mitchell that the release of five senior Taliban officials from that prison was not a surprise. However, she said that the speed with which the White House moved was a shock. Rosenberg added that President Barack Obama‘s administration’s failure to consult with Congress or even allow the Red Cross access to the detainees prior to their release was reminiscent of how George W. Bush’s White House conducted military affairs.

“They did not comply with the 30-day statutory notice requirement,” Rosenberg said. “The president and the White House say that they had the executive authority to do this, particularly because it was this delicate swap for a prisoner of war.”

She added, however, that the White House has been suggesting a deal like this was in the works “for a number of years now.”

RELATED: Stephanopoulos to Rice: Did Obama ‘Break the Law’ in Prisoner Exchange?

That said, Rosenberg noted that the swiftness of the execution of this exchange was a surprise not only for members of Congress, but for the Red Cross, which routinely conducts exit interviews with Guantanamo detainees prior to their final release.

“What I think it says is that the administration moved on its own quickly and was, in a way, using a page from the Bush administration playbook of cutting out Congress, and cutting out the Red Cross, and doing what it thought was right at the moment and telling people afterwards,” she concluded.