Republican Melissa Harris-Perry Guest Erupts: ‘Racial! I Will Not Sit Here and Allow You to Say That!’
video

Republican Melissa Harris-Perry Guest Erupts: ‘Racial! I Will Not Sit Here and Allow You to Say That!’ 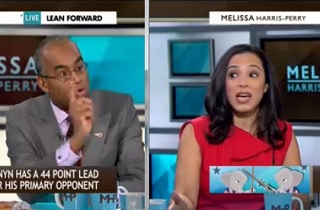 In a media environment in which even the issue of Santa Claus exposes serious racial tension, it isn’t surprising that a discussion of politics would stray into that fraught territory, as it did on Sunday morning’s Melissa Harris-Perry show. In a discussion of Republicans facing tea party primaries, Republican strategist Ron Christie bristled at Democratic strategist Angela Rye‘s suggestion that there was a “very, very racial” aspect to the 2010 midterm tea party sweep. “I will not allow people to sit here and say there was a racial aspect to it,” Christie said. “That’s absolutely false!”

Rye, the former Executive Director and General Counsel to the Congressional Black Caucus, told the panel that “in 2010, the Republican infighting took a particularly dangerous tone, because wasn’t just about infighting anymore, it was about taking our country back, along with the resurrection of the tea party, and it was very, very racial, whether any of them will admit it or not.”

An incensed Ron Christie cut in. “Racial! I will not sit here and allow you to say that!”

As Christie began to deliver an emphatic rebuttal, Rye told him “You should calm down just a little bit.”

“I will not allow people to sit here and say there was a racial aspect to it,” Christie continued. “That’s absolutely false!”

Host Melissa Harris Perry interrupted to toss into a commercial, and when they came back, things were considerably calmer. Harris-Perry attempted to clarify the dispute’s flashpoint, telling Rye, “What I heard you say was that the language of ‘take back our country’ had a racialized overtone to it that was associated with the election of a black president,” and added that “what I felt like Ron heard Angela say was, ‘Republicans are racist.'”

Christie and Rye argued over an incident in which several Congressional Black Caucus members, including civil rights hero Rep. John Lewis (D-GA), reported being spat on and called the n-word on the day of the Obamacare vote.

“This isn’t something that I made up,” Rye said. “These are things that really happened and continue to happen, and we continue to see it in ways people talk to the President, about the President, and is that reflective of all people in the GOP? Absolutely not.”

Christie countered that he was “there that day. I was doing a stand-up for MSNBC,” and that he “did not hear the n-word.”

The videos from that day, though, seem to demonstrate that even without an MSNBC earpiece jammed in your ear, it was impossible to discern what the crowd was saying from even a moderate distance. Christie also cited Rep. Lewis’ unwillingness to be interrogated by the people who were calling him a liar, while Rye cited her own personal conversations with the members in question.

ThinkProgress‘ Igor Volsky interjected that there were other indications of a racial aspect, including Romney campaign surrogates like John Sununu, who had to apologize for saying that President Obama needed to “learn how to be an American.”

“It goes well beyond one incident,” Volsky concluded.

Harris-Perry noted that racial problems are not exclusive to one side, and suggested it would be better to focus on “the question of racially disparate impacts in policy.”

“There are empirical realities about whether or not some policies have a disparately positive impact and/or negative impact on the question of closing the gap of racial inequality,” she said, “and on that, Democrats have done better since democrats became the contemporary Democrats, not the democrats of the — you know, of old, in doing better on policies that close the racial divide on economic inequality — not perfectly, but better.”

Here’s the clip, including before and after the commercial break, from MSNBC’s Melissa Harris-Perry: