Rick Perry to Tea Party: ‘If You Can’t Win Elections, You Can’t Govern’ 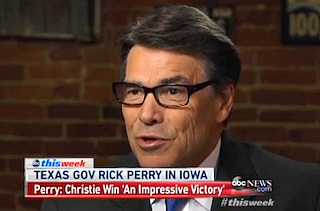 Texas Governor Rick Perry spoke to ABC’s Jeff Zeleny on This Week With George Stephanopoulos Sunday morning about the need for the tea party to become more pragmatic to win elections, and whether Governor Chris Christie’s brand of Republican rule will play outside of New Jersey.

“I certainly enjoyed the twenty-one hours of him standing up and pointing out the foibles of Obamacare,” Perry said, referring to Cruz’s faux-filibuster. “It would have been wiser for us to lay the wood to the president for being able to call him out on this, let it become an issue of, ‘Mr. President, you own this.'”

Perry also took an early shot at Christie, a presumptive candidate for the 2016 GOP nomination.

“He was a successful governor in New Jersey,” Perry said of Christie. “Now, does that transition to the country? We’ll see in the later years and months to come.”

“Is that code for ‘He’s a moderate?'” Zeleny asked.