Roland Martin and Erick Erickson Clash Over The 2012 Election 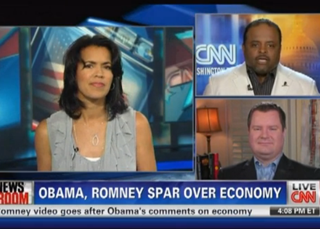 It’s been a fairly newsy weekend in the 2012 presidential election, despite the nation being five months away from the actual election. Between President Obama’s “the private sector is doing just fine” to Mitt Romney saying we don’t need more teachers, Roland Martin and Erick Erickson took to CNN this evening to discuss the longevity of this recent set of gaffes. While Erickson thought the President would have to endure ribbing for this latest one through the fall, Martin warned that five months is a long time to gaffe.

“This is not like what took place in 2008 where Sen. John McCain made his comments about the economy then Sen. Obama jumped on it,” Martin argued, though Erickson disagreed. “Go back to 1992 and George H.W. Bush,” he argued– though rather than bringing up “read my lips, no new taxes,” he noted that the Clinton campaign effectively mocked President Bush with a story on his “shock and amazement” at grocery store scanners. Unlike that story, with President Obama, “everyone can hear the President in his own words.”

“Bottom line: expect more gaffes,” Martin argued, turning then to campaign finance, where he thought the fact that Romney was a formidable fundraiser was less important than “how much money Democrats will put into superPACs,” who he described as “puritanical” against the use of superPACs.” Erickson argued also that President Obama has a lock on the minority vote to an extent previously unseen, such that he might not need all the money, though Martin still thought it would be a problem.

The two finally tackled the national security leaks and their impact, which Erickson argued “hurts us with allies.” Martin thought the leaks were also bad but, as a media person, had to be candid: “those of us in media– we love leaks!”