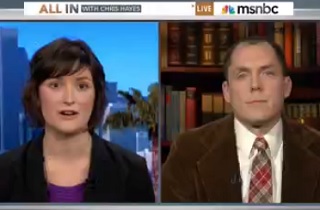 The debate over the contraception mandate usually boils down to both sides making the same claim, that their religious liberty is being infringed, and retorting to each other “No, it’s not.” That’s how Carney began, arguing that “Barack Obama has his own sexual morality, I have my own, they follow the Catholic teaching. That’s great, this is a free country. I don’t think Barack Obama should get to impose his morality on me the second I go into business.”

Hayes pointed out that “The employer here is saying their freedom is being impinged because the Affordable Care Act requires them to pay for insurance that gives birth control without a co-pay,” adding that “not giving that, right, has some encroachment on the freedom of the employee.”

“I don’t see that as having any encroachment on the employee, because the employee is perfectly free to go out and by his or her own birth control separately,” Carney replied, then made his odd comparison with Alec Baldwin’s anti-gay slurs. “You at MSNBC, you infringe on your hosts’ right to go out and make anti-gay comments in their personal lives, and I think it’s great that you make those decisions.”

After some wrangling with Carney, Hayes tossed to Fluke, who offered that the issue “goes even beyond health care. It’s a corporation picking and choosing which types of laws they want to comply with. And our belief in this society has always been that we protect the religious liberty of individuals in their private lives, but that when you cross that line and go into the public sphere and decide you want to operate as a company, make a profit off of the public, you need to abide by the public’s laws.”

That’s a devastating point to Carney’s premise that a business is the same as the individual business owner, as evidenced by Carney’s desperate rejoinder. “That’s not really true, Chris, right now you and I are putting our opinions out on television. You are making money on this, I am not. Would it be okay for the federal government to say ‘Chris is in business on TV, so we’re going to infringe on his First Amendment rights, but Tim and Sandra, they’re just doing this non-business…”

Hayes was so flummoxed by Carney’s construction that he hardly knew where to begin, but the fundamental weakness (of many) in that argument is that Chris Hayes is not a business (or even the owner of the business), just as NBC/Universal is not a person. All the rhetorical acrobatics in the world won’t change that, and as Fluke pointed out, businesses don’t have the same rights of expression as individuals.

What is so often missing from the contraception debate is the idea of equal protection under the law, the selective denial of necessary medical coverage to only one gender, and the fact that these businesses aren’t paying for contraception, the employees are. Health insurance is not some gift given out of benevolence, it is part of an employee’s compensation, so all Sandra Fluke is asking for is that the insurance she has earned is equal to that of every other American’s.

Tim Carney is a very smart conservative, so the fact that his argument was so easily derailed is a very good sign for reproductive freedom, and for the religious freedom of women in the workplace.