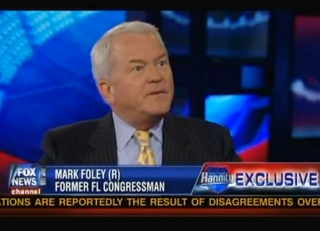 Before last night, only CNN could tout a bona fide sex scandal veteran on their Rep. Anthony Weiner sexting fiasco coverage team. Tonight, Fox News upped the ante with an exclusive interview with former Congressman Mark Foley, who told Sean Hannity how he overcame his demons and how he expects Rep. Weiner can repair his life.

Foley found himself in disgrace after lewd email communications between him and 16-year-old boys were discovered, after which he immediately resigned. For Hannity, the behavior was inexplicable, though Foley tried: “I saw the computer screen almost like a confessional in a church,” he noted, trying to grasp at the safety he felt despite the risk he was taking. Meanwhile, he refused to seek help because “I didn’t want anyone to see me reaching for something that would give me understanding.” Hannity asked how he dealt with the issue today: “do you punish yourself every day?” Foley noted that he did struggle with the consequences of his actions to this day.

Unlike the way Democrats appear to him to be treating Rep. Weiner, however, Foley said he found no support among his peers to stay in Congress after the scandal broke. If he had known beforehand, Foley noted, “[House Speaker] Denny Hastert would have punched me in the nose.”

Foley also tried to use his experience to evaluate Rep. Weiner’s situation: “I first considered my family, my community, my staff, and the Congress that I love,” and he concluded “resignation was the only option” because curing himself was impossible within the Beltway. “While I was in the cauldron, I would’ve never fixed that life.” While he refused to give explicit advice because “I don’t think I have the qualifications to give him advice,” he did tell Rep. Weiner: “you cannot fix your problems from inside that building.”