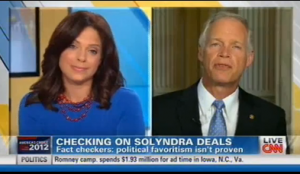 Wisconsin junior senator and Romney supporter Ron Johnson appeared on CNN’s Starting Point Tuesday morning, where host Soledad O’Brien asked him about “crony capitalism” and Solyndra, only to find that the discussion very quickly turned to the Soviet Union.

O’Brien played a short clip of GOP presidential candidate Mitt Romney telling a crowd back in May that an independent inspector general had found the Obama administration had steered money to contributors and friends. She then read from a 2011 Washington Post report noting that “records do not establish that anyone pressured the Energy Department to approve the Solyndra loan to benefit political contributors.”

“It doesn’t make the investment a good investment,” Johnson insisted.

The main problem, he said, is that the President “simply doesn’t understand that it’s the free enterprise systems, the private sector, the productive sector, not the government sector that creates long-term sustainable jobs.”

“Take a look at the Soviet Union,” he continued. “Venezuela’s an economic basket case. And is anyone moving to the island paradise of Cuba?”

“You surely are not suggesting that the idea and concept between Solyndra and other green energies like Solyndra is comparable to the Soviet Union and Cuba, right?” asked O’Brien.

“No, I am suggesting that,” he said. “Because when you take taxpayer money and you invest that into businesses, that’s the taxpayer money put at risk. And let’s face it, the lesson on the Soviet Union and other socialist nations is governments are poor allocators of capital. It’s an economic model that doesn’t work.”

“Didn’t it work in Massachusetts?” asked O’Brien, citing Romney’s own work in that state.