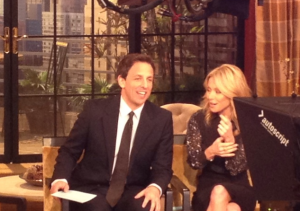 According to Showbiz 411, a week-long co-hosting gig on the show will prove to be a “test” for Meyers:

But on Monday, July 9th, Meyers starts a five day stint. It’s the first Monday to Friday stint for any co-host since Neil Patrick Harris from Novem ber 28-December 2 last year. (And NPH is still unavailable, thanks to “How I Married Your Mother” on CBS.) I’m told that if Meyers gets the job, and it seems likely, he’ll still do the news on “Saturday Night Live.” He may have to resign as head writer of the show, however, given the “Live” schedule. Meyers has been a popular co-host for Kelly, having sat in the chair in April and then again in May for multiple appearances. (He was also on a few times before that.)

It also seems key that Meyers is doing a full week in the middle of July sweeps. This is a big test.

And who would take over for Meyers as SNL‘s head writer if he makes the move to morning TV? Splitsider has a few guesses, namely writers Colin Jost and John Mulaney. “Both receive Writing Supervisor credits in addition to their writing credits,” the site points out, “which Seth Meyers also had before becoming co-head writer in 2006, so one of them would be a natural choice. Jost has been there longer — he started in the 2005-2006 season — so he may be the natural successor.”

h/t Showbiz 411 via Splitsider, Photo via