Sharpton Fires Back At O’Reilly: Since When Are You The ‘Expert On What African-Americans Want?’ 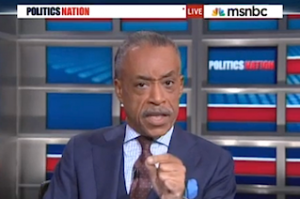 MSNBC’s Al Sharpton took Bill O’Reilly’s recent comments about race head-on Friday evening, after the Fox anchor singled him out last night for being “in business with people who put out entertainment harmful to children.” Sharpton called it “ridiculous” that O’Reilly is somehow the “expert on what the vast majority of African-Americans want.”

“In the time since George Zimmerman’s acquittal,” Sharpton declared, “some right-wingers have gone into overdrive to push the most negative stereotypes of the African-American community for their own gain.” He lumped O’Reilly in with Rush Limbaugh and Sean Hannity as the “unholy triumvirate of right-wing reaction” that has “been desperate not to have a real conversation about the injustices of the justice system.”

Sharpton mocked O’Reilly and others for their sudden concern about gang violence in Chicago, something he said “many of us in African-American community” have been talking about for months. “Better late than never, I guess.” On O’Reilly’s focus on the breakdown of the African-American family, Sharpton asked, “Is Bill O’Reilly saying George Zimmerman shot Trayvon Martin because Trayvon was born out of wedlock, even though he wasn’t? That’s ridiculous, right?”

“All of this is an effort to avoid addressing the urgent topic that something is fundamentally flawed with our justice system if laws like Stand Your Ground allow a kid to be gunned down,” Sharpton continued. “But Rush, Hannity, O’Reilly don’t want to talk about that.”

Sarcastically calling O’Reilly the “expert on the vast majority of what African-Americans want,” Sharpton said, “we need a real conversation about justice in this country, not the same old right-wing divide and conquer garbage. Bill O’Reilly, the Willie Horton stuff has got to go.”