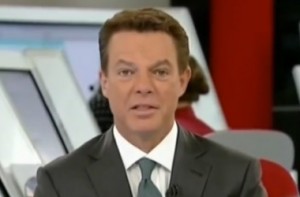 During Fox News’ live coverage of Kentucky clerk Kim Davis‘ release from prison, anchor Shepard Smith suddenly spoke over the press conference to chastise Davis and those who supported her decision to refuse to issue gay marriage licenses.

“They set this up as a religious play again,” he said. “This is the same crowd that says, ‘We don’t want Sharia law, don’t let them tell us what to do, keep their religion out of our lives and out of our government.’ Well, here we go again.”

“When this started, this lawyer said he needed an accommodation for a woman who wanted one. She said she didn’t want her name on a license for gay people,” Smith said. “Now they’ve come up with one, they’ve let her out of jail… But it’s not what they want.”

Smith argued the Supreme Court had already ruled on the issue of gay marriage, and the issued was settled. “This is not unprecedented. They did it when they said black and white people couldn’t marry.”

In the end, he concluded, “Haters are going to hate. We thought what this woman wanted was an accommodation, which they’ve granted her, something that worked for everybody. But it’s not what they want.”