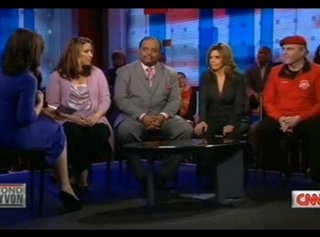 After almost two weeks as a national news story, the Trayvon Martin case has elevated many tempers and flared up more than a few political wars– so yesterday’s Beyond Trayvon special on CNN, hosted by Soledad O’Brien, was a welcome change of pace to the story. Rather than the brief and punchy 5-minute debates on other networks over the story or its politicization, or the extended humiliations of weak witnesses and lawyers (and sometimes empty chairs) that characterized the week, O’Brien and her panel took and hour to debate the cultural impact of every detail, the place the story has in our national historical narrative, and what exactly led so many to care so deeply about the Florida teen and the fate of his shooter.

With an hour to study the case and the way it played out in the media, O’Brien had plenty of time to focus on the specifics, from the way Zimmerman’s 911 has been interpreted to the damage the reputation of community watch leaders has taken to the cultural implications of being black and wearing a hoodie. On hand were experts in almost every relevant field– from lawyers to psychology experts to police chiefs to cultural commentators and first-hand witnesses to similar events, like Kadiatou Diallo, mother of slain young man Amadou. There was a surprising amount to parse and, given the time, enough to flesh out the details of the larger implications as well as the specifics that make the case so compelling and difficult to follow.

The below exchange, with panelists Alicia Salzer, Roland Martin, Jane Velez-Mitchell, and Curtis Sliwa, is the most diverse segment in terms of topics covered and voices heard. It starts with how the hoodie became a symbol of thuggery, with Martin explaining, “the clothes are not the problem, it’s the consciousness. It’s when you put the clothes on a certain skin.” They touch on the details in the media– particularly Geraldo Rivera‘s comments that hoodies kill (Sliwa, a community watch leader, argued that “Trayvon didn’t have to have a hoodie” for Zimmerman to decide to kill him”)– and shifts to the photos used of the two people out that night, Trayvon Martin and Zimmerman.

There is not much politics here– and, in fact, Roland Martin makes a clear point in a later segment that the wishes of Trayvon Martin’s parents, that Zimmerman be arrested and their son given due process, have little to do with the peripheral political discussion, whether it be about gun rights or racial profiling. Which, sadly, given how apolitical the death of a child should be, is rare in the coverage of the story, whether because the luxury of having an hour to make nuanced arguments has been granted to few other journalists discussing the issue or because other simply chose not to take a look at the facts and the cultural, rather than political, impact of the case. With a media on 24-hour election duty for a good year at this point, it may be difficult to fight the inertia of Election Mode to slow down when a story this tragic and this weighty hits us. O’Brien and her team and panel succeeds in doing this here, and stepping away to let it speak for itself when necessary.