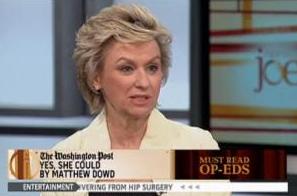 “I think that what people are responding to is that great sort of vitality, confidence. It doesn’t matter that the confidence is based on a kind of total ignorance. It’s a vitality about her that people like, an unequivocal, in the present, raw, visceral quality that she has. And the reason people are responding quite so profoundly is we do have a president that does start to feel rarefied, unpassionate, with no bottom line. And I think the juxtaposition of those two things is making the excitement about Palin perhaps even greater.”

As Brown juxtaposed Palin with Obama, she seemed to compliment each while simultaneously exposing what she feels are their political weaknesses. Co-host Joe Scarborough asked Brown to explain her “total ignorance,” comment, and later Mika Brzezinski revisited some of what she had to say. “With all due respect, don’t you think there’s a possibility the media is misreading her message, and how she translates with people?” asked Brzezinski.

Brown seemed to defend the legitimacy of Palin. “I think they underestimate how profound the connection is,” she said. “I mean, I don’t think it’s just a celebrity connection. I think the profound connection is about the great discontent Americans rightly feel with how they’ve been stiffed.”

Here’s the clip, including a discussion of Lou Dobbs and his presidential aspiration (Obama vs. Palin vs. Dobbs 2012?):