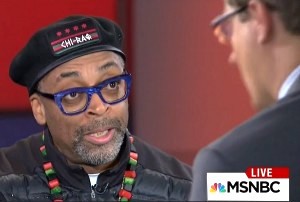 There were some minor fireworks on Tuesday night’s All In when host Chris Hayes challenged director Spike Lee over his new film, Chi-Raq. Specifically, Hayes asked Lee to respond to the criticism that his film’s focus on “black-on-black crime” is a red herring that is frequently used as a rejoinder to the #BlackLivesMatter movement. Lee was essentially not trying to hear that, noting that his film deals with “both sides.” Things got a little heated, and Lee even pulled out a “sir” on Hayes:

Chris Hayes: One of the things we hear all the time is black on black crime. you guys are protesting because you know, a cop shot this young black man but young black men kill young black men all the time. There’s a sense in which people feel like that is a disingenuous misdirection, on the part of some people, not everyone, obviously.

Spike Lee: First of all, people that look at my body of my work. I’m the director that made Do the Right Thing, Malcolm X, I could go on for another three hours. Look at the body of work. I did not get off just a turnip truck.

Hayes: No, I’m not accusing you of that…

Lee: Sir, it doesn’t matter to me what color or complexion that pulls the trigger. As an artist, I’m going to look at it, and look at both sides. There’s a specific scene where Samuel L. Jackson talks about it. Where he’s in the middle, there’s a gang banger on one side and Chicago cop on other. If you’re a parent — whether your child got killed by a gang banger or cop, you still feel the same.

Let me first say that I haven’t seen the film, and let me also say, at the risk of losing a stack of rewards points off of my Black Card, that when I first heard that Spike Lee was making a film called “Chi-raq,” I wondered where he’d developed a fascination for former French presidents.

With that in mind, let me offer that Spike Lee is a little too quick to dismiss the criticism, especially on the basis that he covers “both sides,” since the title of the film (I’ve since figured out) is a slang term for Chicago, meant to evoke the city’s street violence. Spike Lee is, as he points out, an artist first, with no duty to make things simple or comfortable for his audience, but he’s also an influential figure in popular culture.  The fact that he chose to make a film with that particular focus, at a time when racist concern-trolling (and just plain racism) about black-on-black crime is constantly used to undermine the #BlackLivesMatter movement, is a choice that at least deserves an explanation.

Instead, Lee bigfoots Hayes with his resumé and the tired observation that dead is dead, which is true, but doesn’t really address the criticism. The tragedy of a life cut short by gangs or cops is, indeed, equal, but they aren’t the same, and the difference does matter.