Sputnik and Spudnuts: WTF Was Sarah Palin Talking About? 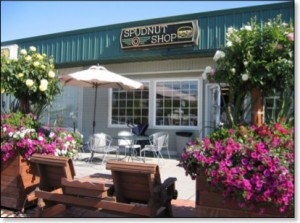 Former Alaska governor Sarah Palin offered her thoughts on President Obama‘s State of the Union address to Fox News’ Greta Van Susteren Wednesday night, and while she cleverly zeroed in on the unfortunate abbreviation of the speech’s “Win The Future” theme, Palin’s analysis quickly went rogue with reality. Despite her proximity to its launch site, Palin displayed ignorance of Sputnik 1‘s significance (both in the speech, and in Soviet history), and offered a bizarre non-prescription for America involving something called “Spudnuts.”

In case you missed it, here’s the clip of Palin’s appearance on Greta Van Susteren’s On the Record:

VAN SUSTEREN: Former Alaska governor Sarah Palin is still with us. And Governor, last night there was a lot of discussion about the Sputnik moment that the president talked about. Do you agree with him? Do you — and is this our moment?

PALIN: That was another one of those WTF moments, when he so often repeated this Sputnik moment that he would aspire Americans to celebrate. And he needs to remember that what happened back then with the former communist USSR and their victory in that race to space, yes, they won, but they also incurred so much debt at the time that it resulted in the inevitable collapse of the Soviet Union.

So I listened to that Sputnik moment talk over and over again, and I think, No, we don’t need one of those. You know what we need is a “spudnut” moment. And here’s where I’m going with this, Greta. And you’re a good one because you’re one of those reporters who actually gets out there in the communities, find these hard-working people and find solutions to the problems that Americans face.

Well, the spudnut shop in Richland, Washington — it’s a bakery, it’s a little coffee shop that’s so successful, 60-some years, generation to generation, a family-owned business not looking for government to bail them out and to make their decisions for them. It’s just hard-working, patriotic Americans in this shop.

We need more spudnut moments in America. And I wish that President Obama would understand, in that heartland of America, what it is that really results in the solutions that we need to get this economy back on the right track. It’s a shop like that.

Now, I have good friends, whom I respect a great deal, who insist that Palin is no idiot. Out of deference to them, I’m going to go ahead and assume that Palin just thinks her audience is made up of idiots.

Palin’s first mistake (or misdirection, if she’s no idiot) is in misplacing the US’ role in the President’s Sputnik analogy. Palin seems to be cautioning America against launching its own metaphorical Sputnik, a complete misreading of the meaning of “Sputnik moment.”

The Soviet Union’s launch of a satellite that was only slightly more advanced than Balloon Boy 1 is not the model of success to which the President’s speech urges us to aspire, but rather, the flood of research, innovation, and achievement that it spurred in a then-complacent American psyche. The negative consequences of Sputnik to the Soviet Union, then, would only serve to reinforce what the President said.

Even in twisting the meaning of the President’s analogy, though, Palin twists history to suit the view from her front porch. While it’s tough to pinpoint a single reason for the dissolution of the USSR, the space program isn’t one of them, at least not in the substantive way that Palin imagines. The Cold War arms race is the factor that most closely tracks here, and while the Sputnik 1 launch was a shot across the bow in that war, it was a drop in the arms race bucket.

Palin then goes on to suggest that what America needs is a “Spudnut moment,” explaining that there’s this successful small business in Washington state, and that America needs to do…what? Have lots of successful small businesses? Stop preventing successful businesses like The Spudnut Shop from being successful? Palin never really explains how this is supposed to work, but I think the equation goes something like this: “Sputnik moment” + “Something that sounds like Sputnik but isn’t”=WIN!

Still, a closer look at the story of Spudnuts reveals that the shining example she uses, The Spudnuts Shop in Richland, Washington, is part of a larger story that reinforces much of what President Obama said.

The Spudnuts Shop is, indeed, a successful small business, as attested to by recent profiles on Food Network’s Unwrapped and the Travel Channel’s Donut Paradise. In a way, they’re also the embodiment of the innovative spirit that President Obama is trying to rekindle. The shop’s founders saw the early potential of the Pelton Brothers’ innovative use of potato flour in doughnut-making, and got in on the ground floor with a franchise back in 1948. Spudnuts became something of a craze, eventually growing to over 600 locations in the US and elsewhere.

However, the good times didn’t last forever, and the Richland Spudnuts Shop is one of only about 40 surviving Spudnuts locations. The Pelton brothers sold the company in 1975, at which time those who had paid for franchises could no longer get the original Spudnuts recipe. The parent company went out of business a few years later, but a handful of owner-operated shops continue to use the Spudnut name.

The success of the Richland Spudnuts Shop, by all accounts, is due to the consistently hard work and exceptional service of its employees, as much as to the spud-rific goodness of its doughnuts. There was no “Spudnuts moment” for the Richland shop; there were 60 Spudnuts years (and counting).

The truth is, not everything fits neatly into a political metaphor, but if you look at The Spudnuts Shop’s history, their biggest obstacle to success came, not from government interference, but from a faltering corporate parent. When the Pelton Brothers sold the company, franchise operators were left stranded without a recipe, and those who survived improvised their own.

In fact, the only mention of the government in the Spudnuts Shop’s story is of the highway that was built in 1950, allowing it to expand from a wholesale-only business, into the icon of American success Palin has just made it.

Palin never articulates how America is supposed to duplicate that success, or how that differs from Barack Obama’s vision to Win the Future, but if nothing else, maybe she’ll help to sell a bunch of Spudnuts. Personally, I can’t wait to try one.