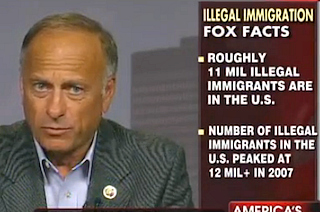 Steve King fired back at GOP critics on Fox News Saturday afternoon, arguing that his statement that most immigrants covered under the DREAM Act were drug dealers with “calves the size of cantaloupes” was “factually right,” and claiming that many of the Republicans publicly bashing his comments were privately agreeing with him.

“What do the critics have to say about the number or the description?” King asked. “They have no hands-on, no eyes-on [experience], they don’t have nay data. I’m factually right, and they’re offended by the reality, because they have an agenda.”

Prominent Republican lawmakers including John Boehner and Eric Cantor denounced King’s comments this week, coming as they do in the midst of a major intra-party dispute over the House GOP’s potential role in passing immigration reform. Fox host Uma Pemmaraju challenged King to explain why the rest of the GOP wasn’t supporting him, and King replied that they were only not doing so publicly.

“Is the description such they have to go out to the press and do a press conference, or can they come and tell me, ‘I know you’re right, support you?'” King said. “They can do that privately. They have a lot of stake here. There’s a leverage within the House of Representatives and they all need to be concerned about their own leverage. So I’m not asking them to step forward. I wouldn’t ask them to step forward. I don’t want them to take repercussions. I want the rule of law preserved.”

“I have spent a lot of time down on the southern border,” King said. “I’ve ridden for days with the Border Patrol. I’ve sat on the border at night, in the dark, no night vision, minimal security, and had illegals coming across that border on both sides of me. You can count the shadows and can’t be sure, but the noises you hear you know are real…This is hands-on, eyes-on from the Border Patrol as well. I got a call from them yesterday, and I said, ‘Did I need to come back down and refresh myself?’ They said, ‘No, you’re spot on with what you’re saying, but maybe you got the weight ten pounds up.'”