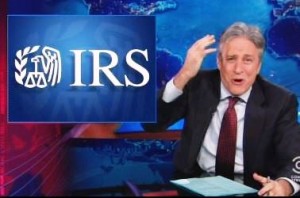 Jon Stewart mercilessly tore into the Obama administration tonight over the revelation that the Internal Revenue Service specifically targeted Tea Party groups for scrutiny. Stewart slammed the government’s lack of “managerial competence” and said that thanks to this scandal, conspiracy theorists how have a level of vindication they’ve never had before.

After briefly responding to Bill O’Reilly going after him, Stewart mockingly opined that there is no possible justification for all the wild claims conservatives have made about government overreach, only to be caught up with the IRS scandal. Stewart said the whole tax-exempt status thing is “bullshit,” but it’s bullshit that should be granted equally.

Stewart slammed the IRS director who not only thought an apology was good enough for an IRS-related matter, but admitted she’s not good at math. Stewart snarkily replied, “That’s a good one, lady who works at the place that calculate people’s taxes!”

Stewart explained exactly why this scandal has changed the dynamic between the White House and its conservative opponents.

“Well, congratulations, President Barack Obama, Conspiracy theorists who generally can survive in anaerobic environments have just had an algae bloom dropped on their fucking heads, thus removing the last arrow in your pro-governance quiver: skepticism about your opponents.”