Stewart Destroys Pres. Morsi For Going After ‘Egypt’s Jon Stewart’ After Vowing To ‘Welcome Every Opinion’ 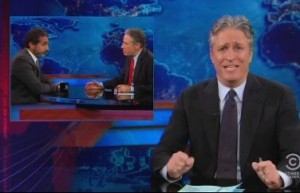 On Monday night, Jon Stewart took to defending Bassem Youssef, who’s often known as Stewart’s Egyptian counterpart. Youssef recently spoke out to CNN about Egypt’s “fascist” regime under President Mohammed Morsi — and has faced interrogation after his comedy show criticized Morsi. After some joking around, Stewart had a message for Morsi that highlighted his hypocrisy and pettiness.

“Your people invented civilization,” Stewart noted, incredulously noting that by Morsi’s logic, Stewart, too, would’ve been quickly jailed (along with Fox News). And for what? Poking fun the president’s hat and less-than-fluent English? “Silencing a comedian doesn’t qualify you to be president of Egypt,” he told Morsi. “Just president of NBC.” (Bazinga!)

Stewart continued on, dialing back a bit on the jokes and asserting, “When you are actually powerful, you don’t have to be petty” — and asking what, exactly, Morsi is afraid of. Having hosted his show for over a decade, Stewart assured Morsi that “there’s been a grand total of zero toppled governments we’ve brought about during that time.”

“Bassem loves Egypt so much he chooses to live there even though some crazy guy is threatening to arrest him,” Stewart continued. “By the way, without Bassem and all those journalists and bloggers and brave protestors who took to Tahrir Square to voice dissent, you, President Morsi, would not be in a position to repress them. For someone who spent time in jail yourself… under Mubarak you seem awfully eager to send other people there for the same non-crimes. Just like you, they will only emerge from prison stronger and more determined.”

Stewart then pointed to Morsi’s own past remarks, in which he said he welcomes “every opinion,” and that there’s “no way” critics would face harm for voicing opposition.

“Democracy isn’t democracy if it only lasts up until someone makes fun of your hat,” Stewart concluded.