Stewart Grills Stephanopoulos on Hillary Scandal: ‘Are You Familiar with the Clintons?’ 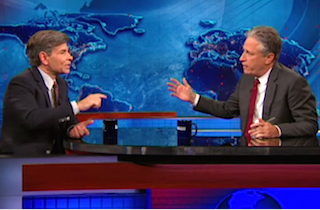 Jon Stewart started off his interview with ABC News anchor George Stephanopoulos by asking how a news organization could spend so much time covering the White House Correspondents’ Dinner while Baltimore was burning just a few miles away. But soon, their discussion turned to another story that has been on the former Clinton White House staffer of late: foreign donations to the Clinton Foundation while Hillary Clinton was secretary of state.

“Are you familiar with the Clintons?” Stewart asked Stephanopoulos, echoing the concerns of potential bias that have been raised by certain Fox News commentators. “Foreign donors that might have given to the Clinton Global Initiative and then there might been favors done at the State Department and it might been to the tune of, I think, some millions of dollars.”

Stephanopoulos, who recently conducted an aggressive interview with Clinton Cash

author Peter Schweizer on This Week said, “This is a tough one,” noting that the book even states that there is “no direct evidence of action taken on behalf of the donors.”

“But everybody also knows,” he continued, “when those donors give that money… there’s a hope that that’s going to lead to something and that’s what you have to be careful of.”

Stewart more or less dismissed the idea that the donation issue constituted a “scandal” in today’s political environment because Hillary Clinton is openly saying she aims to raise $2 billion. “Now, what does that money buy?” he asked.