Stewart: If ‘F*ckface von Clownstick’ Trump Runs in 2016, I Might Not Retire
VIDEO

Stewart: If ‘F*ckface von Clownstick’ Trump Runs in 2016, I Might Not Retire 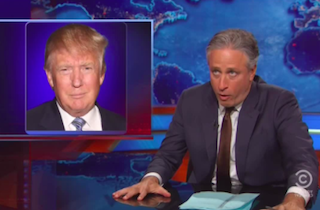 Jon Stewart welcomes another slew of Republican candidates to the 2016 race Thursday night. And while George Pataki, Lindsey Graham and Rick Santorum can’t make him change his mind about leaving The Daily Show, a real-life Donald Trump candidacy might just make him scrap his retirement plans and put Trevor Noah out of a job.

While Santorum and Pataki might be showing early signs of promise, Stewart said they would have to work a bit harder to catch up to the “mid-season, mildly racist form” of someone like Carly Fiorina who said the “Chinese can take a test, but what they can’t do is innovate.” Or Lindsey Graham, who said he knows the Iranians are “lying” because his family ran a pool room.

“They’re all very colorful characters, but for me — for me — there can be only one Fuckface von Clownstick,” Stewart said, before playing the clip of Trump saying he knows how to defeat ISIS, but doesn’t want to give it away.

“Not because I don’t have a foolproof plan, I do,” Stewart said as Trump. “But I’m not going to tell you, I’m withholding it for now, because I am a tremendous asshole.”

Stewart went on to praise the “excitable” and “unpolished” Bernie Sanders in relation to the overly controlled Hillary Clinton, who somehow becomes southern when she speaks in the South.

“The problem isn’t Bernie Sanders is a crazy-pants cuckoo bird,” Stewart concluded. “It’s that we’ve all become so accustomed to stage-managed, focus-driven candidates that authenticity comes across as lunacy.”