Sunday Show Round Up: Was This the Most Pointless Cable Segment Ever?
SUNDAY SHOWS

Sunday Show Round Up: Was This the Most Pointless Cable Segment Ever? 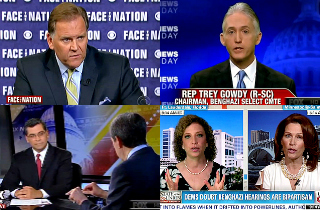 The two were counterpoised around Benghazi and Obamacare, issues over which American reality has halved and hardened. It was fitting that the two lawmakers were not even in the same room together: for the duration of the segment, they seemed to be inhabiting two separate dimensions that met only at one loud contentious portal:

The result: cacophony. The reps did nothing but shout talking points, but even if they hadn’t any original argument would have been lost beneath the hollers: a good one-third of the nearly ten minutes of debate was literally inaudible. Nobody’s narrative was advanced; nobody’s argument landed; no fact was successfully proved or disputed; no point of view was shown to be definitively grounded or delirious.

At the end, host Candy Crowley lamented that neither of the women had been in the studio where they could been controlled; it seemed an acknowledgement that both had been culled from twin roiling voids to which they would now return, and it left the viewer wondering: what the hell was point of that?

This is not to say that there is not productive conversation to be had about either topic, though the U.S.S. Generative Discussion may have sailed on Benghazi. Anyhoo, calmer and slightly more rewarding debate was had at 1211 Avenue of the Americas, where Reps. Trey Gowdy (R-SC) and Xavier Becerra (D-CA) swung at each other like…civilized partisans? At least a punch landed here or there: Becerra held up the stack of reports from seven previous Benghazi investigations (like the House GOP’s Obamacare repeal votes, there have been so many Benghazi investigations we seemed to have lost count); meanwhile, Gowdy, who got made a fool of by his own party fundraising over Benghazi after he publicly declared they shouldn’t, shot back that Democrats sure had no problem raising money off tragedies Katrina->Sandy Hook.

You can quibble with each man’s point, but at least they were engaging with each other.

Contestant Most Clearly About to Start a Radio Show Award

Rep. Mike Rogers (R-MI) is outta here, dropping his chairmanship of the House Intelligence Committee to become a radio host. Natch, he had the best line of the day:

“You can’t base your policy on what’s trending on Twitter. It has to be more than hashtags and selfies.”

That’s radio-worthy, in an empty kind of way. Now do that for four hours every day. Pro-tip: mocking Millennials is only good for meeting a deadline.

Single mother-blamer George Will wants to know how “grown adults” get rolled into hashtag activism, which in Will Land is Al Gore’s fault. “Power is the ability to achieve intended effects,” Will intoned. “[#BringBackOurGirls] is not intended to have any effect on the real world.” Meanwhile, his Sunday-morning-coming-down BFF Brit Hume yukked it up something serious. “It’s trending on Twitter!” he said of the kidnapped Nigerian schoolgirls.

Would anybody care to explain it to Tweedledee and Tweedledum? Julie Pace, shoot:

“I do think that you have to take this for what it is. I don’t think anyone is saying that by standing there taking a picture of yourself holding a sign, you’re going to get these girls back. But you have to remember, this is something that had really not been talked about, not even by the Nigerian government itself, before this started to really take hold on social media. Now, what it has done is put some pressure on the Nigerian government to accept some international assistance. So, standing there holding a sign may not bring the girls back, but it could ratchet up the pressure.”

See, power is the ability to achieve intended effects. Condescension is the mocking of those effects on Sunday shows.