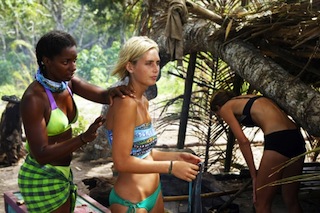 Episode 5 begins with the woman quizzing Troyzan about the events that led to tribal council and the men forfeiting immunity. Sabrina basically sums it up saying, “the guys are more of a mess than we thought!” …Ain’t that the truth! Colton seems to be running the show, and so far, the moves that he has made have been LESS than stellar. Just saying.

Out With The Old, In With The New!

Before the reward challenge, Jeff drops a bomb (not really, considering they told us last week what was going to happen) on the two tribes telling them that it will no longer be men vs. women. Jeff passes out eggs to each person and explains that they contain a color – either orange or green which represents the new tribe that they will belong too. Speaking from experience, it’s really difficult to take all of the twists that this game throws at you in stride. On the outside you want to remain cool, calm, and collected but on the inside, you’re secretly dying. I’m sure this situation is no exception. Alliances are established and now the game is shifting and changing entirely. It can be somewhat terrifying…unless, in this case, you’re the “green” team which is comprised of: Kat, Chelsea, Michael, Jay, Sabrina, Kim, and Troyzan. (Cue the gasps.) Umm, tough draw for the orange team, that’s all I gotta say. Colton, Tarzan, Christina, Alicia, Monica, Leiv, and Jonas – I mean, the only semi-bright spot here is Monica and Colton sums this WHOLE debacle up best by characterizing the green team as “Greek Goddesses” and his own tribe as “peasants…well, the village people” (as if “the village people” is a step up?)

On to the reward challenge in which both tribes will race to fill a bucket, laced with holes, full of water. While attempting to plug the holes from leaking, the tribe will race back to the start and fill an additional bucket until it is heavy enough to drop to the ground, raising the team flag. The winning tribe will receive two loaves of bread, peanut butter and jelly, as well as coffee, sugar, and cream! Peanut butter was the one thing I missed the MOST on Survivor. I would crave it on the daily – so I can see how this reward would be AMAZING! In addition, the winning tribe will be able to stay on the “One World” beach while the other tribe will have to start ALL over. Eww. I’m not gonna drag this out…the challenge ensues and……………………………shocker, the green team wins! (Yes, I will be referring to them as “green” and “orange” because I can’t remember the tribe names, sorry I’m not sorry).

“The Dumbest Players Ever”

The ‘orange tribe’ find their way to the new beach and are pleasantly surprised with their surroundings and the abundance of materials, but Colton is less than thrilled coining his tribe “the dumbest players ever.” He immediately starts making alliances and promises to literally every single member of the new tribe. First, he pinkie swears with Alicia that he’s sticking with the girls, then he “pounds it” with Jonas to solidify they’re “manly” alliance, and probably shakes someone else’s hand but I can’t remember because at this point my head’s spinning! He may be annoying to some people, but he knows the game and he’s definitely not afraid to do what it takes to get to the end. Period.

On the other beach, Kim meanders off in search of the idol and guess what? Finds it, with what seems like no problem whatsoever. She chooses to show Chelsea the idol and they claim they must use it “wisely” as it could be a game changer. The green tribe seems to be in great shape … not only did they win the food reward, they are also having great success hunting for crabs and they caught a few chickens as well. Talk about a feast!

Each team would compete in the water 3 vs. 3, first to secure the ball tossed out by Jeff and score three times in their respective hoops, wins. This challenge rocked but it also looked exhausting! There is a reason why it was the first team to score only three hoops. You may be sitting on your couches, shouting “that looks so easy! I could do that,” while eating a tub of Ben & Jerry’s … but you forget that these people haven’t eaten, slept, and have been under an intense amount of stress. The reality is, very few people could do it.

The challenge, complete with a few tackles, shoves, and one Kat stiff-arm to Christina’s face, is really no competition. The green team defeats the orange pretty handily in my opinion. One of the most hilarious moments of this scene was when Colton, by the grace of God, ended up with the ball and was basically drowning while screaming “HELP ME!” No, I wasn’t laughing because he was drowning, I was laughing because of his cry for help…at this point, everything he does makes me laugh. Again, sorry I’m not sorry.

The orange team preps for tribal council … and by “preps” I really mean that Colton sets the stage for what’s to come. It is decided that Monica, who is arguably the strongest member on the team, should be voted out. Tarzan, God bless him, has a difficult time remembering names and when Colton approaches him with the plan, he questions him saying “Is Monica the one in the pink bikini?” Gosh Tarzan…you would remember her by her bikini (giggling). Thankfully, Colton helps Tarzan remember her name by pairing it with “Monica Lewinsky” and all is well with the world.

At tribal council, we get to hear Tarzan spout out vocabulary that no one really understands (including Jeff), and listen to everyone make a case for why Monica is a threat. She’s a threat because she’s on a team with people who don’t have half a clue…do you think she would be considered a threat on the green team? Honestly? I really liked Monica and am actually sad when Jeff says it is time for her to go.

I see more struggles on the horizon for this orange team…maybe they’ll have a chance if the next challenge contains some puzzles – but then again, Alicia and Tarzan are on their team…so probably not.

1. Michael – Although he doesn’t get much air-time, he was a beast in tonight’s challenge.

2. Monica – The only bright spot on the orange tribe – she is definitely a fighter, and I like that!

3. Peanut Butter – For putting smiles on at least seven faces tonight (eight including mine).